Denny Zeitlin: Stairway to the Stars 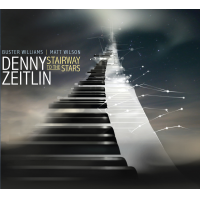 Pianist Denny Zeitlin's Stairway to the Stars recording sparkles to life on the familiar Great American Songbook jewel, "There Will Never Be Another You." This version has everything that the best piano trio efforts offer: elegance, inspired three-way interplay, a vivacious groove—thanks to drummer Matt Wilson and bassist Buster Williams—and Zeitlin's always supple touch and endless inventiveness.

Zeiltin, has rolled in a creative high gear since his teaming with Sunnyside Records in 2009, beginning with In Concert with Buster Williams and Matt Wilson. Since that Sunnyside debut, he has released on the label two masterpieces of solo piano, Precipice (2010) and Labyrinth (2011), in addition to his audacious electro/acoustic symphony, Both/And (2013), three sets that represent the artist's best work in an extended and distinguished career that goes back to his sideman assignment in flutist Jeremy Steig's Flute Fever, (Columbia Records, 1963) and a quick follow-up with his first release under his own name, Cathexis (Columbia Records, 1964).

Stairway to the Stars was recorded in 2001, at the Jazz Bakery in Los Angeles. It's a full set at the club that finds the trio locking in with a spirit of fun, adventure and devil-may-care panache. The tunes, for the most part familiar fare, are given a rare buoyancy and bounce by Williams and Wilson, and a shimmering and sometimes bright shining sheen by Zeitlin. Few pianists working today have his command of harmonic depth, his "just right" and sometimes daring touch with a melody. The nine minute plus "You Don't Know What Love Is" has never sounded lovelier, with Wilson's popping percussion, Zeitlin's pinpoint delicacy and subtle flourishes.

The disc's title cut, from the 1959 Billy Wilder movie, "Some Like It Hot," celebrates the tune with a subdued groove, Williams' bass pulsing like a lovelorn heart, Wilson whispering in her ear with his brushes, Zeitlin in a spare note mode, with small splashes of beautiful harmonic embellishment. Zeitlin also offers Wayne Shorter's "Deluge," a distinctively modern-leaning tune that the trio goes after with gusto, and there's Sonny Rollins' "Oleo," taken at a freewheeling, careening pace, with Zeitlin combining the rare combination of grace with runaway speed.

Rodgers and Hart's "Spring Is Here," from the 1938 musical "I Married and Angel," is given a slow bossa nova treatment, and the closer, "Out For A Stroll," the lone Zeitlin original on the set, finishes up in a bluesy groove, a relaxed spring-in-the-step rhythm to take the music off down the road.

A beautiful set that will rank with the top piano trio outings of the year.

There Will Never Be Another You; You Don't Know What Love Is; I Could Have Told You So; Oleo; Stairway To The Stars; I'll Take Romance; Bass Prelude to Deluge; Deluge; Spring Is Here; Out For A Stroll.