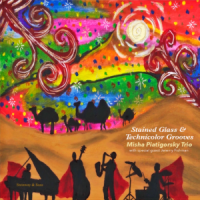 When the story of the Jewish immigrant influence on American jazz comes to be told, after the Trump era with its narrow perspectives has passed, the name Misha Piatigorsky will be writ large in the telling.

He is one of the most sought-after pianists on the New York scene, his music busy and cosmopolitan, reflecting his experiences as a Russian-Jewish émigré coming of age in urban America.

Winner of the 2004 Thelonious Monk Composers Competition, Piatigorsky has produced over 30 award-winning albums in diverse genres that include hip-hop, Brazilian and Jewish music in addition to jazz.

Jazz Review described Piatigorsky's technique as combining "the chalice of modernism with the stew-pot of soul."

This album was the brainchild of drummer Sam Fishman, its aim to introduce provincial audiences to the feel of a New York jazz club. Piatigorsky, having performed at nearly all the jazz venues in the Big Apple, was a natural choice as leader.

Fishman recruited his brother Jeremy to add an extra dimension on saxophone, which he does very effectively on "Afro Blue," the old John Coltrane favourite, and "Inside Straight" by Cannonball Adderley.

Sam Fishman says, "There is magic embedded in this recording, fuelled by the spark of spontaneity that can only be achieved in a live performance. This is the beauty of jazz, capturing a moment in time and creating a musical conversation that may never happen again in the same way."

"I Wish I Knew How It Feels To Be Free" contains an example of just such a musical conversation between Piatigorsky and Jeremy Fishman. It is rough and freewheeling and, on occasion, teeters on the edge of chaos. Such is jazz.

Where’s The Sun; Nachlaot; Superhero; Close Your Eyes; Pure Imagination; Moten Swing; Afro Blue; Inside Straight; Misha’s Mood; I Wish I Knew How It Feels To Be Free.