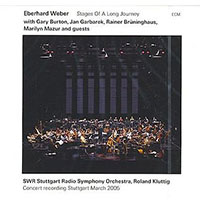 If there's any lesson to be learned from Eberhard Weber's Stages of a Long Journey, it's this: just because you don't doesn't mean you can't. A career-spanning retrospective of his own most enduring compositions expanded, in some cases, to include a symphony orchestra, the bassist delivers more than a few surprises. Naysayers only cursorily familiar with Weber's ECM discography—largely defined by improvisation based firmly on defined structure living somewhere between the jazz vernacular and European classicism—often operate under the misconception that he lacks the ability to play "real" jazz.

He can. Here, Weber tackles Carla Bley's classic "Syndrome" with his core quintet- -vibraphonist Gary Burton, saxophonist Jan Garbarek, pianist Rainer Bruninghaus and percussionist Marilyn Mazur—and its fiery swing is a persuasive acquittal for everyone (with the exception of Burton, who's allegiance to mainstream jazz has never been questioned). Garbarek navigates the changes with ease while retaining the personal attention to tone that's been a defining point of his career. Weber, using his distinctive five-string upright electrobass, swings energetically alongside Mazur, another artist rarely considered a centrist-capable drummer.

Weber also reunites with pianist Wolfgang Dauner for a soft reading of Jerome Kern's "Yesterdays." Briefly abandoning his hybrid instrument for the acoustic variety, Weber again makes it clear that his choice to evolve a career largely distanced from the mainstream is just that: a choice.

Endless Days (ECM, 2001), was an emphatically small-group, through- composed recording. Here, the bassist reworks some of his best material to explore the nexus where a longstanding interest in structure meets small ensemble democracy. Three of Weber's most lyrical compositions—the title tracks to The Colours of Chloë (ECM, 1974) and Yellow Fields (ECM, 1976), alongside the darkly romantic "Maurizius," from Later That Evening (ECM, 1982)—are joined together as the thirty-minute "Birthday Suite," this 2005 Stuttgart Germany live recording being a celebration of his 65th birthday. Weber's orchestration provides a requisite shape to the suite; still, Garbarek and Burton get plenty of solo space on the individual tunes, while Bruninghaus and Mazur are given brief solo spots that transition between them.

Weber takes the opportunity to reinvent his material in more ways than simply expanding the sonic palette and providing greater contrapuntal opportunities. The pulse of "Silent Feet" is more buoyant than the original, while Mazur lends an insistent pulse to the impressionistic introduction of "The Colours of Chloë."

A compelling retrospective that demonstrates the malleability, melodism and beauty of Weber's oeuvre, Stages of a Long Journey's omission of two words from its source—the bassist's "The Last Stage of a Long Journey," which receives an expansive and expanded orchestral treatment—makes it thankfully clear that this recording is simply a milestone, not an ending.