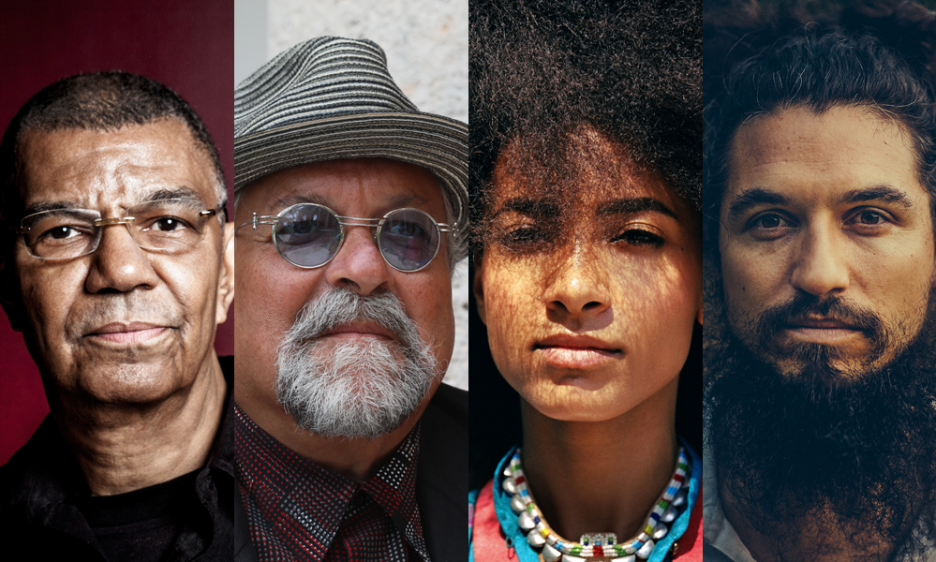 They had to add chairs. The 435-seat Dalton Recital Hall, on the campus of Western Michigan University, was filled with multiple generations of music fans from all walks of life. The alluring ticket, brought to town by Fontana Chamber Arts, was the Spring Quartet in their final concert of a coast-to-coast tour.

In fact, it had been five years since the celebrated group had played together, and by concert's end, it was evident that this enthusiastic crowd was the beneficiary of all those previous shows, the four members pretty much playing as one.

On board were three generations of musicians: the much-feted, rightly praised veteran drummer Jack DeJohnette, the now-legendary reed player Joe Lovano (wearing, of course, one of his usual snappy fedoras), and, thirdly, relative upstarts bassist Esperanza Spalding (wearing a one-piece jumpsuit with a hoodie to match) and Argentinian keyboardist Leo Genovese (sporting a top-of-the-head ponytail). (Sorry, no photographers allowed.)

With such a cast spread across the stage, one might wonder who's the leader, the standout, the scene-stealer? As it turned out, for this reviewer, the revelatory Genovese took top honors, even as all members played with equal amounts of force and flourish, if not enthusiasm. It's just that when it came time for the pianist (who occasionally doubled on Fender Rhodes) to shine, Genovese invariably took his solos and methodically built to climaxes only to withdraw to more subtle gestures only to return once again with yet another splash of notes and feelings. Call it a discovery.

Lovano's aptly titled "Spring Day" (Saturday in Kalamazoo was wondrously sunny, a slightly cool day in May) kicked things off, this medium-tempo romp featuring his burly tenor in a rare (for this evening) lyrical yet typically angular mode, the band eventually breaking out in a playful, swinging groove. There remained what became a kind of feature that night as the music veered outside any familiar harmonic boundaries with a broken feel, especially with respect to rhythm. Spaulding's smiling face (also a regular feature) could be seen atop an outfit that boldly proclaimed LIFE FORCE across her chest, her meaty, deft, full-range solo work a treat. Meanwhile, DeJohnette wasted no time with busy hands and sticks flying across his orchestral assembly of drums and cymbals.

And yet, it was Genovese with a full-throated flurry of acoustic chord clusters, lots of right-hand scampering and eventual locking in with his bandmates that seemed a fitting climax to what became a kind of bebop-y tune.

DeJohnette's "Herbie's Hands Cocked," built around a bass ostinato of sorts, had more of a Latin, samba-esque feel to it. The tune featured a sweet cadence that was playful amidst what became another feature: the band's uncanny knack for the unusual arrangement, players ofttimes soloing in irregular spots, the order and manner of delivery different from expected. And, like practically everything else heard that night, a preference for more angular touches, the minor chord (if there were chords at all) and the unexpected were all highlighted on "Herbie's Hands Cocked."

Lovano's "La Petit Opportune" started out with no discernible pulse, the playing between Jack and Joe becoming highly conversational, full of pauses, stops and starts. There were occasional rhythmic flurries, Spaulding's walking bass like cement to the swing, Lovano's solo on the back end full of shrieks and blaring low notes while DeJohnette kept the fires burning with what felt like an unrelenting storm of tom-tom beats.

Another elusive melody graced DeJohnette's "Priestess Of The Mist," Genovese's slow, ruminative playing starting things off. This dreamy, floating music was carried along by a slow-to-medium tempo, the backbeat gentle, ever so slight. Lovano's soprano saxophone playing was more lyrical in duet with Genovese.

By now, the pacing of what turned out to be a ten-tune concert (including their encore, Lovano's aptly titled "Birds Of Springtime Gone By") was becoming apparent as the moods alternated between the almost frantic to more easygoing to languid and back again. (By the time it was all over, the group's one-set show pushed the 100-minute mark.)

Genovese's "Ethiopian Blues" gave Spaulding a platform to begin, showcasing her dexterity on acoustic as she moved effortlessly up and down the neck of her instrument with alternating slow talking lines against some busy ones. The rest of the band eventually kicked in with DeJohnette's crackling 16th notes playing over the group's insistent ostinato figures. Lovano seemed to mimic Spaulding's earlier lines with soprano runs of his own, the others following in suit to what became a very out, frenetic blues.

As if to continue a spotlight on her, Spaulding's "Work Of Art" started with some musical talking and eventual singing, this slow swinger a full-throated visit that also included a bit of cooing, Lovano's bellowing range emphasizing the song's bluesy contours. "Song For Eric" was the most overt nod to a major, unspoken inspiration, Ornette Coleman, while DeJohnette's tune pointed to Eric Dolphy. Lovano's brief, spritely soprano introduced the music when suddenly everything stopped. The outward-bound trajectory ("Out To Lunch"?) hit the pause button en route to a rhythm section trio conversation in what was yet another novel arrangement of players. An elastic pulse garnered some up-tempo swing, Genovese shining with glissandos galore, more chord clusters and elbow banging a la Don Pullen, the music overall giving off yet another faint bebop air, everything full of tension and release. Lovano returned in another conversation, this time with Spaulding as they played it straight, rhythmically, all of it capped off by some amazing and blazing cymbal and tom-tom playing by a frantic yet always calm DeJohnette.

The pacing of the concert inevitably led to a more nuanced closing, the last songs Lovano numbers that would feature some slow swinging balladry, leaving this enthusiastic crowd with much to digest. Indeed, while the music, in general, was edgier and perhaps more experimental than most of the audience might have expected, there was an obvious appreciation for this band's presence on this very spring-like early May evening. Yeah, maybe it did have to do with this Kalamazoo audience being on the receiving end of all those previous concerts of the Spring Quartet's 2019 tour. The spectacle of four artists so in tune with each other's moods, gestures, the fact that they had this music down cold, a music years in the making, some of it brand-spanking new.