Django Bates: Spring Is Here (Shall We Dance?) 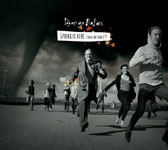 One of the true visionary geniuses of British—and indeed all—modern jazz, keyboardist and composer Django Bates is a shaman and synapse twister with a breathtakingly imaginative take on the traditions and structures he recalibrates. His energy is iconoclastic but also sunny and effervescent and benign, shot through with humor and relish of the absurd. His ideas are big and he particularly excels when writing for big bands, two of which—Loose Tubes and Delightful Precipice—have led joyful rococo revolutions on the London jazz scene since the 1980s.

On Spring Is Here (Shall We Dance?), Bates leads his first post-millennial orchestra, the 19-strong StoRMChaser, through some of the most exuberant, inventive and plain seat-of-the-pants thrilling big band jazz legally available on metal. StoRMChaser is the post-graduate house orchestra of Denmark's Rhythmic Music Conservatory, to which Bates was appointed a professor in 2005 (his connections with Denmark go back to 1997, when he won the Jazzpar Prize). Bates and the band have worked together on a weekly basis for something like two years, a rare opportunity for ongoing experimentation and practice in the generally under-resourced jazz world—and you can hear they've made the most of it.

The album is Bates' most perfectly realized yet, brilliantly recorded by co-producer and co-mixer Andrew Murdock, his longtime studio collaborator. The rich, dense orchestrations Bates loves are captured with extraordinary clarity and vitality. His quirky, sometimes vaudevillian humor resonates too—although this time there are none of the "lovely, lovely old tunes" played, as Bates likes to put it, "in a horrible, horrible new way" which have graced previous sets, like the Dada-esque masterpiece "New York, New York," from Winter Truce (And Homes Blaze) (Winter & Winter, 1995).

But there are many other delights and surprises. Bates has a special fondness for the human voice, and his regular songstress, the singular Josefine Lindstrand, is heard on all ten tracks. The surreal love song "Fire Brigade"—a 2008 hit-in-waiting from the leftfield as certain as "The Real Morning Party" on keyboard player Marco Benevento's Invisible Baby (Hyena Records, 2008)—is one of several tunes on which Lindstrand shines. The Rhythmic Music Conservatory's choir, Som en Sten, is featured winningly on two tracks, "Early Bloomer," first recorded without lyrics on Winter Truce, and its counterpart "Evening Primrose." Saxophonist Tim Berne makes a brief cameo appearance as raconteur on the rocket-propelled "Something Less Soothing" (a quintessentially Batesian title).

Ten magical tracks, ten unadulterated doses of mind altering musical excellence. Spring Is Here (Shall We Dance?) is the frontrunner, by a country mile, in the 2008 big band challenge cup.