BY WALTER ATKINS
October 19, 2019
Sign in to view read count 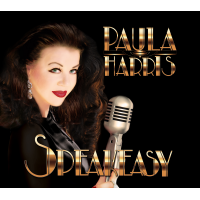 At first blush, SF Bay Area vocalist, music writer and band leader Paula Harris' new Speakeasy CD is a generous 16 song set (12 tracks + four bonus cuts). The album bustles with bluesy and jazz-flavored songs about bad boys and the women who find them irresistible. However, there is a lot more going on here than simply good girls going bad. Taken collectively, Harris' Speakeasy weaves a realistic episodic story of women actively making choices and accepting the ensuing consequences, while searching for meaningful love and relationships in the modern world.

On this musical journey, Harris' stretches out with a mixture of originals and standards rearranged with her personal touch. She is firmly supported on these aural episodes by her top flight band consisting of pianist Nate Ginsberg, bassist Rich Girard, trumpeter Bill Ortiz, and anchored by the energetic time keeper Derrek 'D Mar' Martin.

The prophetic opener "Nothing Good Happens After Midnight" talks about a young girl ignoring her devoted dad's sage advice, and later sneaking out her bedroom window to a waiting car for a good time. Unfortunately, her late night adventure ultimately ends with tear filled remorse. "I Wanna Hate Myself Tomorrow (For Raising Hell Tonight)" is an unapologetic tune about a woman fully recognizing and accepting she's going to regret things later. But she doesn't let this bother her tonight. On this evening, she will be treating herself to a R&B, funky great time and party like ..."the world is going to end tomorrow."

For the next selection "Haunted," the San Jose, California singer makes a powerful statement about a determined woman refusing to accept less than she deserves. She proclaims the guy will be "haunted" by his girl's memories when she leaves him. Harris produces a stylish arrangement of the classic Higginbotham/Drake composition "Good Morning Heartache," originally popularized by the iconic Billie Holiday, and later recorded by Motown's Diana Ross for the Lady Sings The Blues motion picture sound track. The South Carolina native's emphatic closing on the number is compelling.

The rollicking" Soul Sucking Man" is the next chapter in this story inspired by women's dating experiences and mythology. Here Harris belts it out with authority: "Move down the line cuz I don't have the time." This ditty is simultaneously a woman's warning and an invitation, but only if the featured gigolo gets his act together: "Got no time for you till you prove you can be true." In the meantime, the woman dashes away from the "soul sucking" incubus as fast as possible adding, "I do decline—you won't ever get mine." On track seven, "A Mind Of Her Own," the singer turns the tables on a rogue boyfriend now having to deal, for the first time, with his girlfriend cheating on him. Instead of looking outward, the narrative strongly suggests he should ask himself why she stepped out on him.

Among the more provocative works, "Something Wicked" is the centerpiece of Speakeasy, with its sensual and deliciously devilish story telling about a woman seeing her temptation, "Black hair and eyes of green; all my thoughts turned obscene." Harris pulls out all the stops with her deep soulful vocals. "Wicked" also features Big Llou Johnson's impressive baritone delivering a "wonderfully wicked" voice over describing the proceedings and how the girl can't help it.

The bouncy "You Don't Look A Day Over Fabulous" praises a mature woman in a long supportive relationship. She loves the way her appreciative partner addresses her personal image concerns. "Do Me Good" is reminiscent of super star Tina Turner's cover and 1985 Grammy winner "Better Be Good To Me." In this section, a confident woman makes a straight forward demand for her man to do her good or not at all. "This Love is Gonna Do Me In," " Troublemaker" and "'Round Midnight" round out the song list.

Among the bonus tracks, Donnie Hathaway's moving "More Than You'll Ever Know" and the Louis Jordan standard "Is You Is Or Is You Ain't My Baby" both receive ample attention on the arrangements. The relationship killing 'Scratches On Your Back" is a self contained vignette that paints a vivid image of a caught guy now facing his girl's naked outrage and demanding questions with obvious answers. Mercifully, this love tempest is balanced by the lasting warmth of "Forever And A Day."

When considering the album in totality, Paula Harris' Speakeasy presents a comprehensive and genuine story about real women making decisions and enduring detours along the road to authentic love and fulfilling lives in today's environment. While the search may be ongoing for some, Harris' music demonstrates the goal is definitely worthwhile.

Nothing good happens after Midnight, I wanna hate myself Tomorrow, Haunted, Good Morning Heartache, Soul Sucking Man, This Love is GOnna Do Me In, A Mind of Her Own, Something Wicked, Trouble Maker, "Round Midnight, You Don't Look a Day Over Fabulous, Do Me Good, More Than You'll Ever Know, Forever And A Day, Scratches On Your Back, Is you Is Or Is You Ain't My Baby.