By MARK REDLEFSEN
September 8, 2010
Sign in to view read count 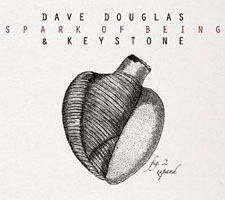 Just as summer comes to a close, another great release from trumpeter/composer Dave Douglas comes along. Expand is the second part of a trilogy of music, performed by Dave Douglas & Keystone, for the Bill Morrison film Spark of Being (2010). The film and related music bring Mary Shelley's iconic novel, Frankenstein (1818), and the relationship between science and humanity in the future, into a modern light. The first part, Soundtrack (Greenleaf, 2010) , was released earlier in the summer, with the conclusion, Burst (Greenleaf, 2010), to follow in the fall. All three releases are also available together as a box set.

Workaholic Douglas has been even more focused on how he releases his music in terms of format, content, and timing over the past half a decade, since creating his own label, Greenleaf Music. In contrast to the Dave Douglas Quintet, Brass Ecstasy and his larger group projects, Keystone marries film scoring with technology and technique. This ambitious series of Keystone releases represent the group's third outing in the past five years.

Expand stands on its own for those unfamiliar with the finer points of the Keystone's previous releases, or the Spark of Being story backdrop. Douglas's subtle, yet adventurous sound guides like a compass. Clocking in with six songs in 42 minutes, Expand is full of strong compositions that create eager anticipation for the rest of the project.

The opening "Spark of Being" eases in with the Douglas' trumpet over Adam Benjamin's bed of Fender Rhodes chords, shadowed by DJ Olive's electronic laptop blips and squeals. Tenor saxophonist Marcus Strickland joins in, blending with Douglas in the front line as light rumbles begin to follow from drummer Gene Lake and electric bassist Brad Jones. The somber "Creature" follows, as the growls of monsters, represented through sound effects, eerily echo behind the music.

In contrast to Douglas's other groups, Keystone relies less on obvious jazz fusion riffs, even though the trumpeter's arrangements often find the band playing in tight unison on pieces where the tempo picks up, such as "Tree Ring Circus" and "Travelogue." DJ Olive's samples and electronic patchworks augment and complement his band mates, particularly on "Observer." The closing "Prologue" is dazzling, as it plods slowly with a solid beat from Lake pushing Benjamin, with Douglas soloing as the imaginary credits roll in anticipation of the next and last part of this trilogy.