BY IAN PATTERSON
February 27, 2013
Sign in to view read count 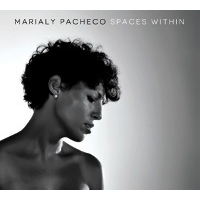 Spaces Within is Cuban pianist Marialy Pacheco's first trio CD since making Brisbane, Australia her home in 2009, though it's her fourth overall. It follows Songs That I Love (Pinnacle Records, 2011), an impressive solo outing where Pacheco displayed all the strengths that won her the Montreux Jazz Festival Solo Piano Competition award in 2012. As good as that solo album is, Pacheco clearly thrives in the trio setting, and drummer Joe Marchisella and brother Pat Marchisella on bass prove to be intuitive partners in a predominantly vibrant dialog. Pacheco's striking improvisation lies at the heart of the music, but equally impressive is her emotional range.

Pacheco pens a nice melody and uses these motifs as starting points and guiding pathways for her improvisations. Pacheco is as informed and inspired by Cuban pianists as she is North American or classical pianists and it's all there, rather subtly blended, in the mix, with the rhythm section bringing a contemporary edge to the pianist's compositions. The opener, "Low Tides," sees Pacheco's harp-like delicacy on the intro soon give way to free-flowing lines. A simple bass pulse anchors the trio as Joe Marchisella's busily chattering drums go neck-and-neck with the pianist's charge. The adventure completed, the trio gracefully navigates its way back to the gentle head.

The three-part "Three Songs in E-minor" seems nominally like a mini-suite, but stylistically there's plenty of light between the compositions. The rhythmically driving "1" features tremendously fluid soloing from Pacheco, interspersed with her percussive accents. "2" is a haunting ballad that carries great emotional weight within a skeletal frame. Pat Marchisella's animated bass solo contrasts with Pacheco's more softly stated intervention. Tension ghosts elusively, though never quite tearing loose and dissipates gradually. The staccato phrasing of "3" has a punchy energy, and Pacheco's constant motivic development has a little of pianist Ahmad Jamal's tireless explorations.

There's greater lyrical flow to the lovely "September"; Pacheco caresses the melody for a full four minutes before the trio open ups, pushing the pianist into more overtly improvised territory. Strong melody and cantering rhythm combine on the celebratory "Sale El Sol." On "Sonrieme" Pacheco's classical background asserts itself in the baroque intro and more subtly so as her improvisation unfolds. By way of contrast, the somber, melancholic soundscapes of "Open Spaces" are evocative of Norway's Eple Trio. In its primary use of bold chords, and by eschewing soloing in favor of a powerful collective ambiance, this piece provides a striking closing note, and perhaps indicates that Pacheco is searching for new sounds and textures to explore.

With half a dozen CDs and a number of international awards to her name, Pacheco is already an experienced and increasingly renowned musician. Spaces Within is an impressive effort, seductive and full of invention, and one that adds to Pacheco's reputation as a composer and performer of some quality—an exciting talent who is really beginning to blossom.