By AAJ Staff
January 23, 2005
Sign in to view read count
South Africa may be best known in the rest of the world for its significant jazz and gospel output, but it's also home to a burgeoning pop scene which merges kwaito (a homegrown techno/hip-hop/house hybrid) with various roots and international influences. These two records exemplify the modern sounds of urban South Africa, a place where restless expansion never gets in the way of having a good time. Out on the dance floor, or inside at home on a rainy day. 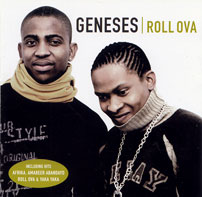 Following the 2003 release of Verse 2 , the pop duo known as Geneses drew a great deal of attention (as well as considerable record sales) in South Africa and abroad. Radio hits like "Afrika" don't tell the whole story, but they do hint at the duo's accessible, catchy sound, which begs bodily movement but doesn't overtax mental function. Geneses has also developed into a live act, no small feat given the highly produced nature of its recorded music.

Roll Ova opens with a shiny, bright female voice soaring across synth textures, segueing right into the title track, which sets the stage for the events that unfold. An insistent cycling bass line, matched by beats that could (and probably would) make a whole audience clap along, leads in and out of four-to-the-floor house interludes. The vocal hooks, stopping and starting at odd angles to the beats, are peppy and warm. One track later, cascading, interlocking guitars announce a distinctly Southern African flavor (specifically the northern sort). Vuyo's raps don't overstretch the metric beats, instead fitting neatly and compactly in between. Soulful, gospelly choruses follow.

Roll Ova offers the signature licks of South African music—souful harmonized vocals (complete with trilling accents), cyclical harmonies, and a welcoming warmth. But rather than simply plough the field, Geneses opts to mix things up. The hypnotic, twisting "Yaka Yaka" and hard-driving "Vulisekele" (featuring Andy Brown) have been aimed at the radio market, and they offer some of the tightest production on the disc. Here and elsewhere, give producers Qhacks and Jerah credit for getting it right.

The balance Geneses strikes between commercial appeal and artistic innovation is clearly tilted toward the former, but that doesn't lessen the enjoyment of their music one bit.

To judge by sheer talent, Suthukazi Arosi is one of the finest singers in South Africa today. Her sometimes fragile, often fiery voice covers an incredible emotional range without overstatement, a feat her peers may imitate but never reproduce. The aptly titled Ubuntu ("Humanity," Sheer Sound, 2001) was a high point that placed her voice in a warm, inviting context and brought considerable international attention her way. Its "raw magic and rural flavour" (to quote the label's accurate description) was irresistibly magnetic and inspiring.

2004 sees Arosi back with a more pop-oriented offering, The Journey. It's peppy, bouncy, and upbeat for the most part, framing her vocal contributions in a beat-rich context that still retains jazz and gospel elements. The bass and drums are all programmed by producer D-Rex (and Joe Nina, on two tracks), and you have to accept a certain degree of rigidity as a result. But to their credit, the producers offer a different angle with each track and rarely settle into the rut of repetition.

Many of the lyrics will be lost on English speakers, though the liner notes help frame The Journey in a human context. "Ulusana Lwam" offers the following refrain as a hint: "Responsible / I have to be / Responsibilities / I can't run away..." And in listening to the way she plies sensitive, understated vocal harmonies against soaring lines, this tune has a solid internal balance. "Shenxa" introduces a guitar-driven township groove (pinned to a house dance beat) with a call-and-response refrain. The slow-paced ballad "Ubuntu" stresses values, history, and understanding; it lags at times, but conversational vocals help retain interest. "Sthandwa Sami" returns to shiny pop minutes later.

In light of her earlier work, it's hard to place The Journey at the top of Suthukazi Arosi's growing discography (that spot would belong to the very organic Ubuntu ), but her new record still has plenty of that hard-to-pin-down emotional outreach that makes Arosi one to watch. To put it in her own words, "Music is the language of soul."

Visit Sheer Sound on the web.