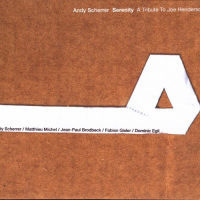 Serenity is an album which makes you instantly travel to the soulful sound of jazz of the sixties. Prepare your ears to hear a really free sax. Swiss tenor saxophonist Andy Scherrer is an under-recognized European jazz talent, just like Ohio native Joe Henderson (1937-2001) was in his early days. He started his career in the '60s, but he had to wait three decades to really become famous when he signed with Verve in 1992.

Scherrer, greatly influenced by Henderson, made this respectful 52 minute salute to one of the men who showed him the way to express himself through his instrument. He didn't pick Henderson's most famous pieces, instead choosing interesting tunes from the sixties that did not become hits but still have a special value for saxophone fans.

The Swiss saxophonist has worked with many local jazz musicians as a sideman and has performed with the Vienna Art Orchestra, and he is still a professor at the Hochschule in Berne. He did not record his first album as a leader until 1999, when the Swiss label TCB released Second Step. Scherrer recorded Serenity with other four other rising Swiss musicians: bassist Fabian Gisler, drummer Dominic Egli, trumpeter Mathieu Michel (a fellow member of the Vienna Art Orchestra), and pianist Jean-Paul Brodbeck.

The opening "A Shade of Jade" represents classic Henderson writing. It starts with Scherrer's soulful and aggressive sax, joined first by Michel, Gisler and Egli, then Brodbeck. "Maxéline," a piece composed by Scherrer, was inspired by the '68 Henderson quartet improvisation "The Bead Game." The rhythm section sounds very coordinated and Scherrer shows a wide tonal variety in his sax playing.

"If you're not part of the solution, you're part of the problem" is a 1967 melody Henderson recorded for Milestone. Here Gisler makes an interesting solo bass introduction, then the band expands the original version to feature two wind instruments instead of one; Michel and Scherrer play as a duo. The title track is a calm, relaxing, and enjoyable piece. "Gazelle" adds velocity to the album, submerging you in a sax journey where fusion is in the air, but then slips from your hands just when you think you've got it.

"Blood Count" is fellow Ohioan Billy Strayhorn's last composition, written in the last years of his life before he died in 1967. Henderson respected Strayhorn and honored his life on Lush Life: The Music of Billy Strayhorn (Verve, 1997). The final track, "Blues for Joe," a Scherrer composition to remember the late Henderson, ends the album perfectly with a loose, relaxed mood. It features memorable solos by Brodbeck, Michel and Scherrer, as well as great rhythm section work.

A Shade of Jade; Max

Gabriel is a journalist who's trying to make jazz more popular for mainstream audiences.