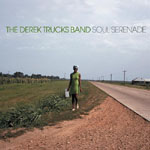 is the fourth commercial release for Allman Brothers guitarist Derek Trucks. A second generation band member (the guitarist is the nephew of drummer Butch Trucks), Mr. Trucks studied carefully the lead and slide guitar styles of the late Duane Allman, incorporating the elder Allman’s propensity for crossing music genera lines at will into his own personal philosophy. Derek Trucks may safely be considered the logical extension of the art of Duane Allman without simply being an imitation.

The title cut is a King Curtis classic often performed by Duane Allman as part of a medley with Willie Cobbs’ "You Don’t Love Me." Here, Trucks segues effortlessly into Bob Marley’s "Rasta Man Chant" and ten minutes of intricate slide guitar playing and ensemble intuition. Trucks covers Buddy Montgomery’s "Bock to Bock" in a clever manner and again with the slide guitar, making Derek Trucks one of the first bona fide jazz slide guitarists. After a blues foray through "Drown in My Own Tears," sung by Gregg Allman, Trucks returns to familiar territory with Mongo Santamaria’s "Afro Blue." Trucks performed this piece as part of a Govn’t Mule concert ( Live...With A Little Help from Our Friends ). Here, the song is pared down and tightened with the help of Kofi Burbridge.

Derek Trucks is exactly the type of guitarist in need... for popular music, for the Allman Brothers Band, for Govn’t Mule, for the Derek Trucks Band. For popular music, Trucks enters as a self-contained virtuoso, capable in all styles of music. For the Allman Brothers band, he is the slide guitarist needed since the horrible loss in the early 1970s. For Govn’t Mule, Trucks pushed Warren Haynes in this creativity and drive. And finally, for the Derek Trucks Band, the guitarist proves himself a clever and capable leader, not afraid to visit new or old themes.

About The Derek Trucks Band