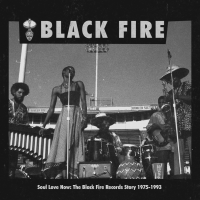 The significance of this superb compilation is summed up by a fuzzy b&w photo inside the twenty-eight page accompanying booklet. It shows Oneness of Juju gathered round a twenty-foot replica of the Statue of Liberty in their hometown, Richmond, Virginia in 1976. You can just make out the expressions of optimism and, yes, patriotism on the quintet's faces. In summer 2020, a full forty-four years later, that vibe of hope is still invested in the future, not the present. It is a shameful, shocking state of affairs.

Soul Love Now: The Black Fire Records Story 1975-1993 is a double album compilation of recordings issued by the Black Fire organisation, a record label and cultural association formed by Oneness of Juju founder and saxophonist J. Plunky Branch and the Washington DC-based DJ and jazz fan Jimmy Gray. Black Fire was one of several such outfits then active in the US, including Black Jazz in Los Angeles and Tribe in Detroit.

Along with creative concerns, these organisations existed to foster social change. Crucially, they believed that African American musicians could best help in the struggle for equal rights and justice by replacing the competitiveness which existed between them with a sense of community and unity of purpose. It was an idea well expressed by the saxophonist Idris Ackamoor in a June 2020 interview in All About Jazz.

"[African American jazz musicians] were raised to be crabs in a bucket," said Ackamoor. "From the 1920s onwards, they were brought up on the idea of the cutting school, where you'd try and best each other in head-to-head jam sessions. 'I'm badder than this cat, I'm badder than that cat.' But my generation felt that the priority had to be unification. Competitive cutting was opposed to unity. It was opposed to 'each one teach one' as the saying went. There was a race war going on in the US. We needed to present a united front."

In his extended and absorbing liner notes to Soul Love Now: The Black Fire Records Story 1975-1993, Plunky Branch expresses the same idea. "The politics of the situation were constantly evolving," says Branch. "As a musician or a creative, it was a matter of how you processed your left-wing orientation in a progressive way and how you could translate that to the business realm. Self-determination and unity became part of the highest ideals. We were not fist-raising revolutionaries by that time but we were trying to be revolutionary in uniting black people."

The idea of community extended to Black Fire's A&R policy, which welcomed musicians who embraced spiritual-jazz and what might be called conscious-funk. A track by track chronicle is unnecessary here. Suffice to say that some of the tracks on Soul Love Now are more jazz than funk, others are more funk than jazz, and all have elements of both within them. The music stands up in 2020. And the struggle continues.