By Javier AQ Ortiz
April 24, 2010
Sign in to view read count
A visit to a New York afterhours dive during the heyday of salsa in the mid 1970s would most likely afford the chance to see charanga groups such as Típica Novel, Orquesta Broadway or Charanga 76, furiously competing against each other— with flutist Andrea Brachfeld holding her own among a bunch of hardcore characters, musical and otherwise, who were adding their own distinctive chapters to the history of this Cuban music. It's a style that owes much to its New York developments, of which Brachfeld is a distinguished part. 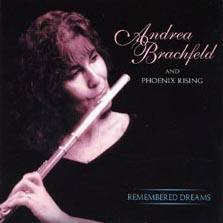 Brachfeld, however, is no mere Latin musical jammer. She is a well rounded and educated musician also practiced in jazz. Remembered Dreams features Brachfeld's Latin jazz compositions within a quintet setting named Phoenix Rising. Her writing is decidedly in the mainstream Latin jazz groove and compares favorably with similar material from her peer group of the late 1990s and the 2000s, particularly in the Big Apple. Brachfeld is a smart and approachable composer who crafts peppered melodies into percussive and harmonic phrases and motifs of various backgrounds, while steering clear of the smoother jazz margins. She does so even when raiding ballads such as "Remembered Dreams" or Brazilian inspired, highly melodic works such as "Oceanside," without losing herself in the predictable and tiresome, self-indulgent jams so tempting for Latin jazzers.

Tone, technique, smarts, brassiness, timing, percussiveness, speed, sensibility and strength are non-issues in Brachfeld's flute playing. Unlike most of her peers, she is not supported by the main Latin jazz stars of the period but the two ensembles herein avail themselves extremely well both individually and collectively.

"Osiana" is a pleasurable ride on funky eights. "Mojivin Sun" is a calmed-yet-driven amalgam. "Afra Jade" is an oddly metered, thick delight. Brachfeld came back with a jazzy bang. 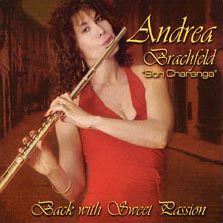 Back With Sweet Passion finds Brachfeld going two steps backward to advance three within the musical territory she's best known for, as the charanguera deepened her charanga knowledge to produce a danceable traditional Cuban swinger with her own stamp on it.

Take her interpretation of "Almendra." Familiarity can betray and bore both musician and listener. This is a classic and, as such, it has been done to near literal death so, what was Brachfeld going to do with it? The inventive arrangement of Al Torrente and Brachfeld prevented betrayals and boredom. The group's performance and all the solos, particularly Oscar Hernández's, are to die for. The melodic beauty is enhanced by enchanting violin and flute contributions, not an easy task when it comes to this song.

"Tres Lindas Cubanas" and "Pare Cochero" also get an attractive facelift. "Rumba chá," however, deserves a particular comment. It is a type of song that is taken for granted among fans of this music but is unique in the world's musical heritage. Not many, if any, musical genres pay homage to musical ancestors as Cuban music does, particularly New York and Puerto Rican salsa. Brachfeld at her best. 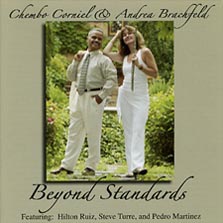 Brachfeld returned to Latin jazz in a session entitled Beyond Standards, co-led by conguero Wilson "Chembo" Corniel, where they give the Hispanic musical treatment to various jazz standards, accompanied by pianist Hilton Ruiz and trombonist Steve Turre among others of various note. They turned out a decidedly solid recording with many bright areas.

As expected, Ruiz and Turre fulfilled their duties impeccably as soloists and ensemble members in what might have been Ruiz's last recording before dying. They supported the writing with their characteristic encyclopedic panache and meshed superbly with the flutist. Their bolero interpretation of Billy Strayhorn's "Chelsea Bridge" is lusty lushness itself with muted trombone, violins, piano and flute oozing deeply felt emotion.

"E.S.P.," on the other hand, becomes a dashing and jamming conga. "African Flower" is much more Africanized than it could ever hope to be in Duke Ellington's privileged hands. "My Little Suede Shoes" affords the rare opportunity to hear the flutist dealing with a Puerto Rican bomba, and she jazzes her way through rather well. 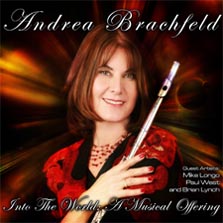 Andrea Brachfeld
Into The World: A Musical Offering
Shaneye Records
2008

Into The World: A Musical Offering still finds Brachfeld in the straight-ahead Latin jazz realm, accompanied by some usual suspects from her career, as well as guests such as pianists Elio Villafranca and Mike Longo, bassist Paul West and trumpeter Brian Lynch.

Brachfeld's playing and writing gets thicker, deeper and better with the passing of time. "Danzón For Richard" features Bill O'Connell's string arrangements in a swing gem with a danzón head and coda where Villafranca eats it up with the leader. The pianist shows why he has made a name for himself in NYC, a feat unto itself. They repeat the dose in "Cha Cha Blue," where both outfun each other as Villafranca stays on top, as behind as possible in his montuneo while Brachfeld is swirling rapidly around him, before another memorable piano solo and then a tasty conga exit. "Passing Friends" showcases the flutist's penchant for beauty, control and strength in her execution and overall musical conception. Mike Long gets to show his excellent ballad chops in "Song For Jenny."

In conclusion, all of Brachfeld's recordings are superior musical works, featuring musical support that would require a great deal of space to be properly documented. But that will not disappoint anyone. Brachfeld has a well deserved reputation in all regards.

Back With Sweet Passion

Into The World: A Musical Offering