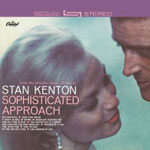 The Donald Rumsfeld of American big band jazz in the 1940s and 1950s, Stan Kenton didn't so much embrace his audiences as shock-n-awe them into submission with relentless carpet bombing. Kenton's monstrous orchestras—the most overblown being the 43-piece Innovations In Modern Music outfit of the early 1950s—specialised in heavy-footed, portentous, screaming brass performances which left zero space for light and shade, spontaneous improvisation or loose rhythmic swing. True to its era, Kenton's music was something from which to duck and cover.

By the end of the 1950s, economics had obliged Kenton to withdraw some of his men, and 1961's Mellophonium Orchestra, featured on Sophisticated Approach, was a mere 22 strong. The lineup included, however, four mellophoniums, the sonic equivalent of heavy artillery, along with another ten trumpets and trombones, and a tuba.

Rarely has anyone achieved so little with so much, although Paul Whiteman had a pretty good stab at it during the 1920s. Whiteman, however, did commission George Gershwin's "Rhapsody In Blue," which is definitely worth a merit badge. Kenton, though he hired some of the finest composers and arrangers of his time, including Gerry Mulligan, Shorty Rogers, Bill Russo and Pete Rugolo, hasn't handed down a single enduring classic to the jazz repertory.

Lennie Niehaus, who arranged the eighteen standard ballads included on Sophisticated Approach, was a collaborator Kenton permitted to be relatively jazzical. Niehaus left some space in his otherwise cumbersome and over-egged arrangements for solos, albeit brief ones, though not one of them on this album sticks in the memory. But by the time of these sessions, he was already on the way to being subsumed by Hollywood (from which his most successful work is perhaps the score for 1986's Heartbreak Ridge). The beautiful and, in their uncooked state, hugely varied tunes are reduced to a single dense and smothering mass.

Listening to Sophisticated Approach for more than about five minutes is an experience akin to having a sumo wrestler sit on your face. It isn't fun, it isn't jazz, and you need to come up for air.

But Beautiful; Darn That Dream; It Might As Well Be Spring; Moonlight Becomes You; How Do I Look In Blue; You Stepped Out Of A Dream; How Long Has This Been Going On; Memoirs Of A Lady; Time After Time; Easy To Love; My One And Only Love; Like Someone In Love; Some Enchanted Evening; Make Someone Happy; Come Rain Or Come Shine; Gigi; Bewitched Bothered And Bewildered; Magic Moment.