BY JIM SANTELLA
October 8, 2006
Sign in to view read count 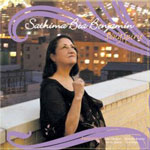 A "best of compilation of Sathima Bea Benjamin's work between 1963 and 2002, SongSpirit lets emotions soar through the poignant themes that she's chosen to represent over the years. Whether she's interpreting jazz standards or telling personal stories about her undying dedication to her homeland, Benjamin always gives it a hundred percent. The fact that she prefers to work with various jazz piano trios from the higher echelons means that we get nothing but the best.

The previously unreleased "It Never Entered My Mind is a duet with pianist Abdullah Ibrahim that was made in 1973. Together, husband and wife pour emotions into their interpretation, leaving nothing to the imagination. It's all there, expressed as only two true believers can do it.

On her earlier dates, Benjamin sang with the demeanor of a comfortable big band singer. Her motivation came from a love for the music, so it's no surprise that she enjoyed sending out straightforward melodies with an emphasis on lyrical beauty. Through some of her later work, she introduced themes that allowed her the freedom to interpret them with her unique manner. Both "Africa and "Children of Soweto come from Memories and Dreams, where she superimposed her emotional melodies over a genuine South African foundation.

1999's "I Only Have Eyes for You finds Benjamin working the pitch over so that it drifts intentionally, adding zest to her performance. It's a personal statement. A little shading here, a little alteration there, and you have an original voice that celebrates freedom.

What Benjamin does with "I'll Follow My Secret Heart (from 2002) represents some of her best work. She's earned the right to follow her own path, and it's no longer a secret. As she marks her 70th birthday, I wish her well and know that she'll continue blazing her own trail among the vocal paths available to jazz singers around the world.

Ah! Sweet Mystery of Life; I Got It Bad and That Ain't Good; Africa; Indian Summer; It Never Entered My Mind; I Only Have Eyes for You; Memories of You; Music; Lush Life; Children of Soweto; I'll Follow My Secret Heart; Loveless Love/Careless Love