South African vocalist, composer, and lyricist Sathima Bea Benjamin was born October 17, 1936 in Johannesburg and raised in Cape Town, where she began singing in church. As a youth, she first performed popular music in talent contests held during intermission at the local cinema and by the late 1950s she was singing at various nightclubs, community dances and social events. She built her repertoire watching British and American movies and listening to the radio, where she discovered Nat King Cole, Billie Holiday, Doris Day, Ella Fitzgerald and other jazz and pop singers who would influence her early singing style. At the age of 21, she joined Arthur Klugman's traveling show, Coloured Jazz and Variety, on a tour of South Africa

Now approaching a decade of operations, Matsuli Music has placed itself at the frontline of reissuing some of South Africa's most influential, important, and yet nevertheless now difficult-to-find albums in pursuit of its stated mission: “The Fight Against Forgetting." Indeed, to that end, founder Matthew Temple has done extraordinary work, as thanks to his efforts, classic ...

Jazz artist Sathima Bea Benjamin's contribution to jazz was immense and her death was a sudden and sad day for music, say her family and friends. Benjamin, 76, died in her Claremont flat on Monday. The songstress was the former wife of jazz legend Abdullah Ibrahim and the mother of musician Tsakwe Ibrahim and internationally renowned ...

A Morning in Paris 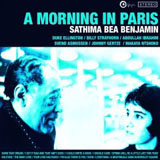 Label: Ekapa
Released: 2008
Track listing: Darn That Dream: I Got it Bad (And That Ain't Good); I Could Write a Book; I Should Care; Spring Will Be a Little Late This Year; Solitude; The Man I Love; Your Love Has Faded; I'm Glad There is You; Soon; Lover Man; A Nightingale Sang in Berkeley Square.

Sathima Bea Benjamin's amazing life reads like the plot to movie. She took time out of her busy schedule to recollect her life's journey from her childhood in pre-apartheid South Africa singing during movie house intermissions to self-imposed exile in Europe where she and pianist composer husband Dollar Brand (Abdullah Ibrahim) were discovered by Duke Ellington. ...

Sathima Bea Benjamin's amazing life reads like the plot to movie. She took time out of her busy schedule to recollect her life's journey from her childhood in pre-apartheid South Africa singing during movie house intermissions to self-imposed exile in Europe where she and pianist composer husband Dollar Brand (Abdullah Ibrahim) were discovered by Duke Ellington. ...