The Flatland Quartet: Songs From The Urban Forest 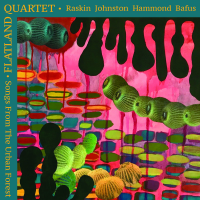 The members of The Flatland Quartet are not only accomplished improvisers, they are socially aware artists. Their activism permeates Songs From The Urban Forest. This is not only because the proceeds from its sale will be donated to the Sacramento Food Bank. All six interrelated pieces are simultaneously abstract and earthy, marked by a sublime balance of the cerebral and the emotive.

Opening the set is "Joe Hill's Last and Final Will." It is built around the poem found in Hill's cell after his execution. Hill was a labor activist who was convicted of a murder he probably did not commit in 1915. His case became a cause celebre for its politically motivated verdict. Guitarist Ross Hammond's tolling strings and saxophonist Jon Raskin's wordless chanting set a solemn ambience. As trumpeter Darren Johnston sings Hill's lyrics, drummer Jon Bafus lays down a somber cadence with his brushes. Hammond introduces some bluesy motifs while Raskin and Johnston conclude with a mournful dirge.

Raskin, best known as a member of the groundbreaking ROVA Saxophone quartet, starts off the folk-tinged "Cries From The Central Valley" with deep melancholy. As Bafus and Johnston build an angular, percolating rhythmic framework, Johnston blows warm, yearning phrases. Raskin's muscular alto builds a fiery extemporization that meanders within the increasingly riotous ensemble performance. Bafus and Hammond, who have collaborated in the past on duo projects, engage in a delightfully dissonant dialogue. The former creates an exquisitely polyrhythmic soundscape and the latter lets loose blistering chords with controlled abandon.

The centerpiece, "Valley Clouds In Winter," is cinematic with a tense four-way conversation that continuously evolves and transforms itself. Johnston's wistful and longing muted trumpet notes contrast with Raskin's short, crisp and crystalline lines. Bafus' restless percussion gallops and thunders, driving the tune. Hammond bends, plucks and caresses his guitar creating a melody of otherworldly lyricism, interspersed with soulful vamps. As the individual streams of consciousness come together the forlorn mood converts to breathless ire. The track and the recording end on a cautiously hopeful note.

Songs From The Urban Forest is as unique a work as its creators, each one of whom maintains his individuality while adding significantly to the ingenuity of the collective. It is singular, provocative and moving.

Joe Hill's Last And Final Will; Cries From The Central Valley; Light And Sound On The River; The Aural Dialogues; The King Of Boulevard Park; Valley Clouds In Winter.