Chris Potter 10: Song for Anyone

By JOHN KELMAN
September 5, 2007
Sign in to view read count 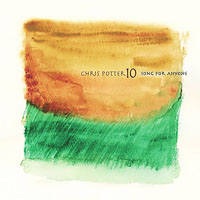 While Chris Potter's other release on the same day, Follow the Red Line: Live at the Village Vanguard (Sunnyside, 2007), is a feature for his high energy, rock- and funk-inflected Underground group, Song for Anyone presents a side to the saxophonist that's not been heard before. Written for an unorthodox combination of instruments, it focuses more heavily on Potter the composer. Still, while context is everything, from the opening notes of the appealing yet knotty "The Absence" it becomes clear that Potter's rapidly evolving voice is recognizable, regardless of the setting.

On these largely lengthy pieces, Potter demonstrates a surprising ear for orchestration. There will be the inevitable "Third Stream" comparisons to recent works like Joe Lovano's Streams of Expression (Blue Note, 2006), but Potter's choice of instrumentation makes Song for Anyone an album that, even when the energy level notches up, is all about soft surfaces and rounded edges. Guitarist Steve Cardenas and bassist Scott Colley are key contributors to Potter's distinctive ambience, especially Cardenas, whose predilection for nylon string guitar makes him sometimes felt more than heard, but always an essential part of Potter's detailed scores.

While strong arrangements define the majority of the album, there are moments of pure freedom, most notably at the start of Potter's powerful solo over a turbulent maelstrom from Colley and drummer Adam Cruz on "Closer to the Sun." A pedal tone from the strings ultimately evolves into an ascending series of dissonant chords as Potter's solo winds down to a string trio section that's dark but strikingly beautiful. Elsewhere, on the equally episodic "Chief Seattle," Potter and Colley go it alone for an in tandem solo section that's the result of many years spent working together on a variety of projects.

Potter's reputation as one of the most important saxophonists to emerge in the past fifteen years continues to be validated with each passing year. Song for Anyone ups the ante, making it clear that, more than "just" an important saxophonist, he's a broad-minded artist whose composition and arrangement skills deserve to be considered of equal value.

The Absence; Against the Wind; Closer to the Sun; Family Tree; Chief Seattle; Cupid and Psyche; Song for Anyone; The Arc of a Day; Estrellas del Sur; All by All.