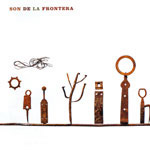 Son De La Frontera's radical ambition on this album is simultaneously to look forwards and backwards—forward to Andalusian retentions in modern Latin American music, back to flamenco's own birth in Moorish music ("Moorish" in a flamenco context being a description as approximate as Jelly Roll Morton's "Spanish tinge," encompassing a diversity of North African and Levantine styles). The roots flamenco quintet succeeds brilliantly and thrillingly, particularly in its rediscovery of flamenco's deepest Gypsy roots in ancient North Indian and Afghani musics.

Blood-related melodic and rhythmic infusions from Cuban, Mexican, Colombian, Moroccan, Egyptian, and Lebanese folk styles help fuel the band's internationalism, but what really delivers the Latin American and Moorish double whammy is leader Raul Rodriguez's use of a Cuban tres instead of a flamenco guitar. This small guitar-like instrument has three sets of double metal strings, and Rodriguez plays it sometimes like an oud (tracks 1-4), sometimes like a sarod ("Cambiaron Los Tiempos"), sometimes like a mandolin ("Tangos De Mi Novia")—and sometimes even like a Cuban tres ("Buleria De Las Flores"). In these various double or drone-string guises, the percussive, rapid-firing instrument dominates every track except Paco De Amparo's lyrical guitar feature, "Recuerdo."

The centerpiece of the album is the intense, nine-minute workout "Cambiaron Los Tiempos," a primal raga duet between Rodriguez's tres-as-sarod and Pepe Torres' handclaps-and-footstamps-as-tablas. Close your eyes and you could be somewhere on Pakistan's northwest frontier, listening to the village Ali Akbar Khan and dodging the drone warplanes. On a lighter note, "Tango De Mi Novia," in which Rodriguez bizarrely and delightfully takes bluegrass mandolin down Mexico way, is also remarkable.

Son De La Frontera will likely outrage conservative elements of the flamenco world, not least because the musicians' average age is about 35, making them practically teenagers in flamenco terms. But you should never listen to neo-cons. Flamenco was born out of the more or less random accretion of folk musics collected en route from India, via the Middle East, the Balkans and North Africa, to Spain—and what goes round comes round.