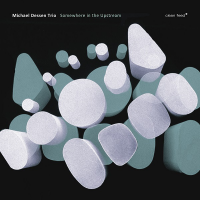 Ace trombonist Michael Dessen is an imaginative technologist when incorporating artistically focused computer-generated sounds into his works as he once again disavows the tried and true with this all-star rhythm section. Complete with unorthodox flows and changeable rhythmic progressions, Dessen's zany and otherworldly live electronics permutations, along with some cosmic interference, offers an extra layer of excitement and curiousity. Essentially, the trio adds a phantasmagoric nuance to various movements throughout this program dedicated to the memory of jazz great, Yusef Lateef (1920-2013).

"Part 3," is prominently underscored by Christopher Tordini's punctual notes as the trombonist maps his dialogues to a blustery gait, shaded with reverb and a resonating echo that sparks depth and wraithlike intimations. However, many of these pieces feature booming overtones and mimicking statements, as the trio abides by a democratic game-plan with a semi-structured stream of novel ideas and off-centered cadences. They skirt modern jazz, blues and avant-garde like expressionism amid a horde of rebuilding efforts and buoyantly executed detours.

On "Part 5," the bassist's extended notes and drummer Dan Weiss's regimented drum solo and clicking rimshots generate the appearance of two dissimilar voices, leading to a closeout designed with the leader's blaring notes and trickling electronics. And of course the musicians reverse-engineer many themes during most bridge sections yet lock into a bubbly groove on "Part 8," which highlights more of a straightforward methodology as Dessen opens the floor and pushes the band through a perky sequence of musical events. Hence, the trio rises to the occasion once again, as they drive the jazz vernacular into the outer limits.