Ultima Armonia: Someone Killed the Swan -- Laments on South-Eastern Europe

By Glenn Astarita
January 10, 2015
Sign in to view read count 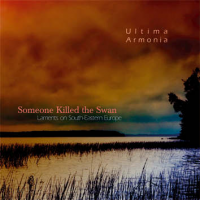 Multi-woodwind specialist Boris Kovac and pianist Stevan Kovac Tickmayer have fostered a musical partnership spanning three decades and lead this European quartet though a progression of laments on South-Eastern Europe amid Balkan, classical, jazz and improvisational settings. This is not an easy to classify album, as the musicians gracefully merge avant-garde treatments with indigenous Euro folk-isms, and even during energized jaunts toward the red-zone, they use plush melodic overtures as the blueprint for compositional form.

The program greatly benefits from an ECM Records-like audio aesthetic as each note takes on copious proportions, complementing the artists' alluring soundscapes. A sense of intrigue permeates the production, whether Boris Kovac executes a sublime soprano sax solo or when the quartet accelerates the improv element via interconnecting dialogues and passionate expressionism. No doubt, several works impart a distinctive storyline, evidenced by the regal, medium tempo march-like and Balkan infused ballad, "Folk Cabaret." Or when he band generates high-heat and off-kilter phrasings ignited by Tickmayer's prepared piano articulations on "Gardon Music II / piano solo." Even when the quartet mixes it up with fervent aplomb, they occasionally blend a touch of mayhem with jumbling percussion cadences, where the rhythm section often drives the frontline's soloing activities.