Ray Brown (and friends): Some Of My Best Friends Are...Singers 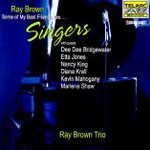 It has been said that you can get by with a little help from your friends. Now, we will all have to get by without one of our best.

Ray Brown was one of the most admired and most beloved bass men of his age. On this new compilation, some of his most talented friends pay tribute by joining the late great on a dozen of his favorite songs.

From Nancy King's whispery "But Beautiful" to Dee Dee Bridgewater's airy "More Than You Know," to Kevin Mahogany's smoothly grounded "The Party's Over," the vocal range nearly matches the range of moods Brown can evince with only four strings. Even so, Brown himself has very little opportunity to step forward and shine. The sign of a true master, perhaps, but also possibly the sin of an uninformed mixer. For though this is an album of Brown's many vocal companions (including a swinging Marlena Shaw, a simmering Etta Jones and a swallowing Diana Krall), it is, after all, his album. And while flashy solos may not have been Brown's mark, a few uninterrupted samples would have been appreciated by friends and fans alike.

I Thought About You; Poor Butterfly; More Than You Know; Little Boy; But Beautiful; At Long Last Love; Skylark; Cherokee; There Is No Greater Love; Imagination; Party's Over; Perfect Blues.