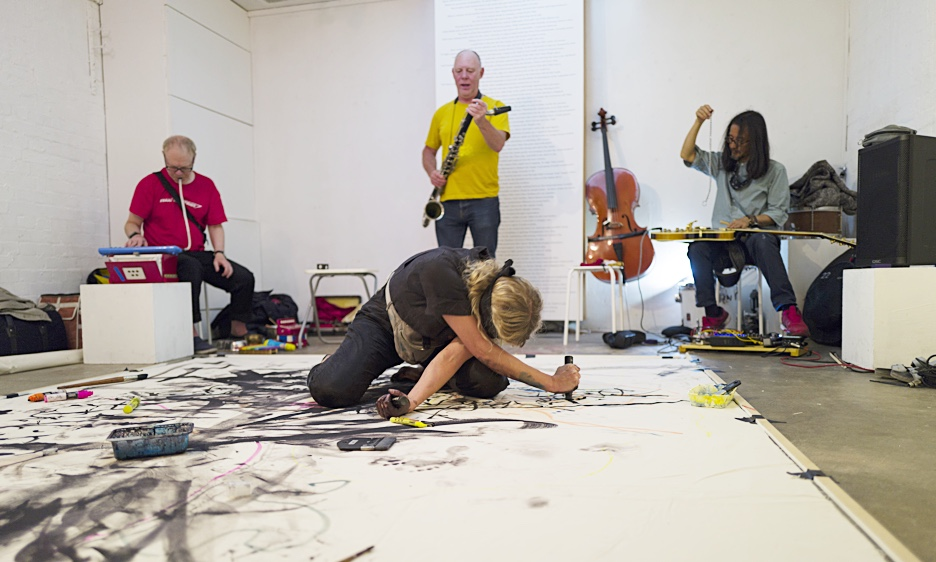 The evening demonstrated the potential for real-time interactions between music and other art forms.

As its title suggests, Some Loose Assemblies 2 was the second (of three) events with a common theme. The events were curated by visual artist Claire Zakiewicz , whose studio is a short walk from Hundred Years Gallery. The theme of the events was to stage live performances of different art forms, so that there was real-time cross-fertilisation between them. For Some Loose Assemblies 2, in addition to the six musicians listed above, Zakiewicz had also recruited dancer Petra Haller and Dutch-born visual artist Gwendolyn Kassenaar.

As a venue, Hundred Years Gallery was an ideal choice for the events as, in addition to being one of London's better venues for improvised music, it regularly hosts exhibitions; so, it is not uncommon for concert goers to sit in the gallery and admire art works on the walls while also enjoying live music. As the venue has limited space, on the evening itself, to accommodate as many audience members as possible, and minimise Covid risks, there were two performances, with separate audiences.

Each performance began with a trio comprising Loz Speyer on trumpet and flugelhorn, Thodoris Ziarkos on double bass and Andrew Lisle on drums. Clad in a head-to-toe black outfit, Haller danced freely in front of the trio, in response to their playing; the trio also responded to her movements. Kassenaar painted throughout the performance but the other performers could not see what she was painting although the audience could clearly see her rapid-fire blue and yellow painting on a black background. To begin the set and inspire the performers, Kassenaar recited the poem 'Steps' ('Stufen' in German) by Herman Hesse, its reflections on death maybe explaining Haller's sombre outfit.

Driven by Speyer's horns, the trio's continuous improvisation was energised and free flowing, giving Haller plenty of avenues to explore with her own free movements; the back-and-forth reactions of the trio and dancer to one another were all too clear to see, and in the two performances were noticeably different, in no way pre-planned or rehearsed. As an end product, Kassenaar's resulting canvas was an appropriate record of the set that the audience had witnessed and was much appreciated.

After an interval, a trio of reedman Alan Wilkinson, playing bass clarinet or clarinet rather than his customary alto saxophone, Keisuke Matsui on cello or electric guitar and Douglas Benford, on assorted instruments, played with Zakiewicz herself. In a set-up very different to Kassenaar's, Zakiewicz painted on a three-metre square of canvas laid out with paints and implements, on the floor in front of the trio, so they could see exactly what she was doing and react to it. She, in turn, painted blindfold but could clearly hear their music and hence respond to it. This difference meant that this trio's music was rather more reactive than that in the first set as they were responding to each other as well as to Zakiewicz' painting; the sets would certainly have been much different had the two trios swapped.

In between the two performances, upstairs in the café, Gerald Curtis, who works across performance, painting and photography, played a short set. Accompanied by recorded piano music, he reacted to it by drawing in black on white paper. Fascinating as it was to watch him create, it was a one way process, not an interactive one such as the other two. It was a reminder that Jackson Pollock used to paint to bebop which influenced his paintings, although that was also one-way as he reacted to recorded music. Altogether the evening demonstrated the potential for real-time interactions between music and other art forms, and the audience left hungry for more such events.