By Doug Collette
December 23, 2017
Sign in to view read count
Wadada Leo Smith's most recently recorded albums reaffirm this trumpeter/composer/bandleader's deep, abiding loyalty to his muse. Equally so on stage or in the studio, Smith's devotion to the creative impulse is absolutely unwavering, and, as a result, his works are pure, direct expressions of his concepts, undiluted by compromise. Such is the uniformity of his execution that Smith can take diverse approaches as represented by these two TUM records, one of which is a solo album in homage to Thelonious Monk, while the other is an open-ended ensemble endeavor where the hornman's collaborators think and play as freely as he. Mirror images of each other, Reflections and Meditations on Monk and Najwa respectively capture both the scope and concentration of this unnaturally gifted musician, the clarity of which promises enduring listening experiences. 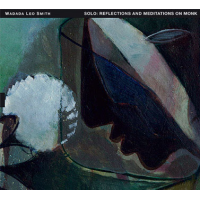 Wadada Leo Smith radiates a decidedly somber, contemplative image in person and in photographs, but, as in the portrait set within the rich color scheme of this lavishly-designed CD package, there's usually the faint hint of a smile on his face. And a comparable subtlety comes through clearly via the dual methods by which he connects with Monk's music here: whether with full-blown gusto or a proportionate delicacy, his lithe, dignified playing evokes the whimsical aspect of the late pianist/composer's own material ("Crepuscule With Nellie") as well as the abiding respect he affords this jazz icon during his own compositions, like the cryptically-titled ("Monk and Bud Powell at Shea Stadium -A Mystery"). On both fronts, Smith vividly evokes not only the essence of the jazz icon he honors, but his own redoubtable creativity as well.

The clarion call the bandleader sounds with his horn to open Najwa immediately gives way to an eruption of improvisation that continues virtually uninterrupted throughout the near-sixty minute duration of the album. With four guitarists plying their bountiful imaginations here, it might all sound too cerebral for its own good if it were not for the heated rhythmic flow generated by bassist Bill Laswell, drummer Pheeroan aklaff and percussionist Adam Rudolph. Yet the octet's performances on this handful of Wadada Leo Smith originals actually reach peak potency because of the subsequent mixing and editing; the production thus maximizes the natural ebb and flow of the musicianship in such a way it so accurately mirrors the detailed design of the CD packaging, this title, like its companion piece, looks and sounds like fine art.

Solo:Reflections and Meditations on Monk

Tracks: Ornette Coleman's Harmolodic Sonic Hierographic Forms: A Resonance Change In The Millennium; Ohnedaruth John Coltrane: The Master Of Kosmic Music And His Spirituality In A Love Supreme; Najwa; Ronald Shannon Jackson: The Master Of Symphonic Drumming And Multisonic Rhythms, Inscriptions Of Rare Beauty; The Empress, Lady Day: In A Rainbow Garden, With Yellow-Gold Hot Springs, Surrounded By Exotic Plants And Flowers.