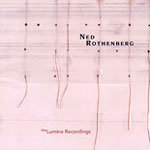 Despite the landmark work of Sonny Rollins, Anthony Braxton, Evan Parker and Steve Lacy, solo saxophone performance represents an exception rather than the norm in jazz and improvisation. Because of the instrumental limitations, solo reed players need to develop complex multiphonic techniques or make use of electronic overdubbing in order to go beyond mere single-note playing.

The Lumina Recordings, recorded between 1980 and 1985, represent the entire spectrum of solo improvisation on reed instruments. The two-disc set contains music from three albums that initially appeared on LP on Rothenberg's Lumina label, now available on CD for the first time. As a bonus, there are twenty minutes of previously unissued music (disc two, tracks 9-11).

On the opening Trials of the Argo," Rothenberg develops long saxophone sequences that intermingle with previously conceived sounds through overdubbing. Throughout the piece's 22 minutes, his playing moves in and out of the background sounds, creating an uniterrupted continuous musical flow.

Evan Parker, another influential solo saxophone improviser, introduced Rothenberg to the music of the Canadian Inuit people, whose traditional vocal music inspired him to record Continuo After the Inuit. Through circular breathing and multiphonics, Rothenberg creates an array of sounds resembling several interacting instruments and human voices, yet the saxophonist does not resort to any overdubs or electronics during the piece's nearly nineteen-minute duration. The vocal quality of Rothenberg's alto saxophone and the dance-like folk rhythms create an almost meditational atmosphere, yet his improvisations are never song-like melodies—they remain modernistic throughout.

Although The Lumina Recordings may be far removed from traditional conceptions of tonality, rhythm and melody, the set's relentless pulse keeps it from sounding overly abstract or hermetic. "My relationship to pulse drew much more from the dance-based roots of jazz and R&B and from love of folk music, Rothenberg states. Despite its jazz roots, Rothenberg's highly individual approach is an amalgamation of various musical traditions and styles, ranging from folk materials to minimal music and the innovations of New York's '80s Downtown scene.

The duos with alto saxophonist John Zorn ("Kakeai ) and drummer Gerry Hemmingway ("Polysemy ) fit well into this program. Most of the mid-'80s improvisations on the second disc are shorter than the earlier pieces on disc one. It is surprising that Rothenberg calls his later improvisations "not nearly as pre-planned as in the early 80s, because his playing seems controlled and structured throughout. It is almost impossible to figure out which parts were pre-arranged or composed, and which parts were spontaneously improvised.

Though they were recorded more than twenty years ago, these recordings sound fresh and innovative, confirming Ned Rothenberg's importance as an influential voice among contemporary improvisers. The 36-page booklet features Rothenberg's comments on his music, plus numerous photos and pictures.