BY DAVID RICKERT
October 18, 2003
Sign in to view read count 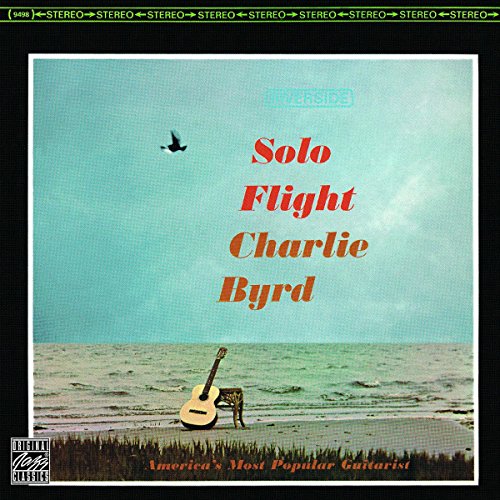 Solo guitar albums can be a tricky affair; even the best of them, like Joe Pass’s Virtuoso occasionally flirt with tedium and seem to exhaust all possibilities relatively quickly. As a result, many guitarists tend to stay away from the demands of the format, preferring the company of at least one other sideman to share the spotlight.

Although many guitarists had tried a solo number here and there, Charlie Byrd was one of the first to devote an entire album to the format. Charlie Byrd’s Solo Flight comes at the end of his Riverside tenure, where he had tinkered with just about every other setting possible, and usually his recordings featured a solo composition or two even then. As a student of Segovia, he was well equipped for the demands of solo readings, and his classical background comes to the forefront on relatively brief run-throughs of material that Byrd had visited on previous recordings.

He virtually strolls through the tunes with his hands in his pockets, and as a result the music doesn’t sound improvised on the spot (a la Joe Pass) but instead seems crafted and rehearsed beforehand (as indeed they may have been). Thus Byrd seems to be playing etudes rather than standards, and we don’t get the sense of an artist exploring new avenues, but rather enjoying the comfort of well-worn paths. Byrd’s crisp articulation and classical influence are present throughout, yet a high degree of sameness in approach makes each tune interchangeable and indistinct. The same licks and fills pervade each song, which are all take at the same relaxed tempo, and the color and variety that other musicians would bring is missed.

It’s too bad – and quite surprising – that Byrd doesn’t avail himself of any of the bossa nova compositions with which he made his name, for that would have been a welcome change of pace. Rather, Byrd turns in modest, polite reading of these tunes, and perhaps this was his goal all along – a consistently satisfying collection that doesn’t bring anything new to the table. Suitable for pleasant background music certainly, but there’s not much to dig for otherwise.

Riverside on the web: www.fantasyjazz.com