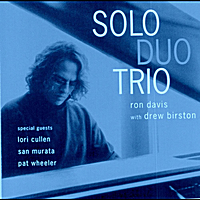 Ron Davis is a dinosaur in this day and age of high specialization and narrow cultural aspirations, in that he is a Renaissance Man. In addition to pursuing his favorite career, jazz piano, and performing regularly in the Toronto area, he also is a published poet and short story writer. He also practices law part time and teaches. His Renaissance disposition has found its way into an eclectic play list and the variety of combinations he has set himself up in to showcase his pianism as he works with a play list of originals and well-known material tapping such sources as John Lennon and Paul McCartney, Thelonious Monk and Duke Ellington. On the solo side of the ledger, "Savannah" and a syncopated "All God's Children" show Davis to be very sensitive to melody with his flowing, uplifting lyrical way with the piano reminiscent of Tommy Flanagan, Vince Guaraldi or Ahmad Jamal. There are a variety of trio combos represented on the disk. One of the more engaging threesomes is where Davis is joined by Drew Birston on bass and San Murata on violin for a captivating version of "Moonlight in Vermont". Another interesting track is a kind of off center, oddly time-sequenced version of "Moon River" with Pat Wheeler on a soprano sax that is absent the whining sound too many present practitioners of that instrument have adopted. The dazzling performing ambience chosen by these artists continues with Lori Cullen's vocal on "I Will". Birston's co-billing on the album is justified as he reveals a seamless virtuosity on the big instrument on "Cullibalue". This is a very solid, satisfying 51 minutes of piano jazz and is recommended.

All God's Children; Cullibalue; Moon River; I Will; Rhythmning; Caravan; Moonlight in Vermont; I Found a New Baby; Savannah; Cheek to Cheek; I Want to Talk About You