BY CRAIG JOLLEY
October 1, 2001
Sign in to view read count 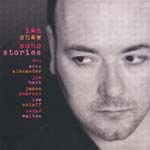 Ian Shaw swings. It's a dynamic swing—not the usual I'll get comfortable and let the rhythm section carry me. He'll speed through a phrase, pause (leaving out words), take off again, and sing through the end of the phrase into the beginning of the next idea. He likes to punctuate by dropping or jumping an octave. He is equally convincing on ballads where his time scintillates as much as on swing tunes. He'll go for a different emotional feel by singing an entire chorus in falsetto (He may have picked this up from Ray Charles.), usually on a ballad. He communicates his meaning of the lyric but doesn't always stay with the original words. More than most other great singers he prefers to stay in the key he starts in.

Soho Stories is Shaw's seventh CD in ten years of recording, and it's his best. Besides just singing better he is more in touch with the back-up musicians—he's part of the band. His frequent collaborator James Pearson accompanies him on most tunes, giving him a comfortable setting to create in—not that confidence was ever a problem. The arrangements, mostly by Shaw and Pearson for a horn or two and rhythm, are tailored to his musical personality.

Notes on my favorite cuts:

"Dearly Beloved" Takes the first chorus almost nude (only a bass behind him). After that he sinks his teeth into some swinging little big band riffs.

"How Little We Know" (the Hoagy Carmichael ballad, not the Sinatra swinger) Conversational and natural. With a less committed singer the lyrics could sound falsely naive, but Shaw's optimism precludes any doubt.

"If You Could See Me Now" Up-tempo Latin arrangement with maybe a nod toward Mark Murphy. Recomposes the tune rhythmically and melodically. Throws away the lyrics (actually drop-kicks them out of the end zone).

"I Keep Going Back to Joe's" Inspired, funky rhythmic background breaks it up and avoids sogginess. Knowing irony comes through just right without dramatics.

Comes Love; I Never Went Away; Ruby; Dearly Beloved; How Little We Know; A Little Piece of Heaven; I Wished on the Moon; Be Sure I'll Let You Know; If You Could See Me Now; Tomorrow Never Came; I Keep Going Back to Joe's; Happy with the Blues; Rainbow Sleeves.