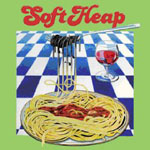 None of the four gentlemen pictured standing on a London street in the booklet for this one are with us anymore, but their brand of music is a perfect antidote to somber reflection. Recorded in 1978 by a quartet of stalwarts from the likes of Soft Machine, Hatfield And The North and Gilgamesh, the music is rife with the aesthetics such backgrounds suggest, but at the same time there's an element of fire which is entirely the product of this particular grouping.

Collectivity is the key. No single personality dominates the proceedings, yet it's true to say that the group identity so keenly established is not achieved at the expense of individual input. Bassist Hugh Hopper's "Circle Line" is fierily lyrical precisely because that potentially precarious balance is so finely struck. Elton Dean's saxello has poise over the occasionally rolling, boiling rhythm, but such is the group's way with dynamics that the piece unfurls with a finesse that would elude many.

"A.W.O.L." strikes a different balance between composition and improvisation, the irregularity of its time making for a different kind of impact, even while Hopper's fuzz bass has the usual effect of confounding expectations. The effect of the music's buoyancy, maintained by a process of collective will, is somehow more profound than it might be in freer territory, and the effect is true even in the quieter moments, where Alan Gowen's synthesizer serves notice of what a deft manipulator he was of that recalcitrant beast.

"Fara" finds Radu Malfatti on trombone and Marc Charig on trumpet coming in as guests, and the former gets the spotlight in an arrangement that hews as close to the tradition as anything here, with Dean and Charig hinting at Ellingtonian lushness in their background figures. Malfatti is forthright and declamatory in a way that's entirely his own and Gowen's electric piano makes for a pleasingly different underpinning even while drummer Pip Pyle shows a deft touch with rhythmic displacement.

The disruptive flow of "Short Hand" is handled with aplomb, a tricky unison figure offset by near free passages, emphasized by the duo of Dean and Pyle. Momentum is never in doubt despite that essentially contradictory state of affairs and it's true to say that a similar lack of doubt can be expressed over the validity of these musical moments caught for posterity. Whilst the physical presences are no longer with us the collective and enriching spirit is thus preserved.