BY GLENN ASTARITA
December 30, 2011
Sign in to view read count 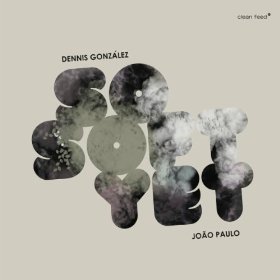 Recorded in Portugal, Texas trumpeter Dennis Gonzalez and Portuguese keyboardist Joao Paulo offer a temperate pastoral setting, grounded on the duo's intake of regional sensibilities, ethnocentricities and emotive responses to cultural and spiritual components. With the effective use of space acting as a third instrument, the duo strikes an ethereal balance, spanning open-air panoramas, lush phrasings and resonating micro-themes via a largely unhurried gait.

The musicians infuse variable moods amid Paulo's edgy and darkly woven electric keys to counter the resonating exchanges and peppery upsurges in pitch. Paulo also performs on acoustic piano, and uses the accordion to shade the proceedings with a mild sense of Spanish bravado. The artists sublimely present a study in contrasts, with contrapuntal maneuvers and orbital choruses in concert with an aggregation of softly stated peaks and valleys.

Gonzalez's concise expressionism on cornet features a myriad of gradually ascending choruses, subtle trills and gently grooving statements. These factors are driven home on "Taking Root," where Paulo's pumping accordion lines perpetuate a sequence of drifting melodies and stately inferences. However, the musicians firmly implant the jazz improvisation component into the big picture.

The duo's deterministic approach and irrefutable synergy provide a baseline for this endearing effort. It's a change of pace from the respective artists discographies, often centered on avant, semi-free or power-packed structural underpinnings. It's a symmetrical presentation that casts shadowy environs to complement many luminescent passages and keenly executed improvisational etudes along with dips, spikes and soul-stirring enactments.