By GREG SIMMONS
November 10, 2011
Sign in to view read count 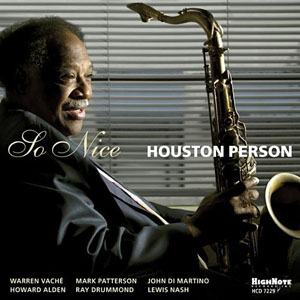 Mom's meatloaf is wonderfully predictable. You always know what you're going to get, and after decades, you've come to rely on it. Why? Because there's something intimately reassuring about knowing that when you go back for more, it's the same as the last time. A recipe change would be simply unthinkable. It's comfort food. Oh, and by the way, it's delicious.

Houston Person albums are like mom's meatloaf. There are never any surprises. The name on the cover announces a creamy tenor saxophone destined to play a mix of standards and ballads with the oddball pop cover thrown in for the kids. Person's tenure on the HighNote Label, now into its third decade, is one of the most consistent in jazz. His emotive delivery, impeccably played with flawless sidemen, all beautifully recorded by the legendary Rudy Van Gelder, is as consistent as that meatloaf, and that's the way it should be.

Person isn't taking any creative risks on So Nice. The album opens with an old trick on the up-tempo ditty "Blues Everywhere." The track round-robins the soloing in a formulaic progression so that everyone gets an equal spotlight. It's more an announcement of who's on the date than an actual creative outlet, but the quality of the work promises good things from the rest of the record.

The ultimate Person moment comes late on the album, with "Easy Living." His pronouncement of the melody is so rich and full that if he'd closed the song after three bars it still would have been worth hearing. He keeps soloing to a minimum, preferring to let the melody do the work for him. It's the wise choice of an experienced balladeer, and it's perfect.

Another treat is the "Stephen Sondheim Medley." Played as a duet with pianist John di Martino, Person's delivery is so warm and buttery that it just melts out of the speakers.

HighNote has always maintained consistently high production values on Person's records, and So Nice is no exception. The sound is gigantic, with the piano filling the full space that a six-foot long percussion instrument requires. Person's big horn is always right up front with appropriate weight, scale, and those gorgeous tonal colors. Every instrument is crisp and clear, and correctly scaled. The world would be a better place if every jazz record were recorded like this.

No, Houston Person isn't breaking any new ground with So Nice. He doesn't have to. He does what he does, and he does it really well. You'd never tell mom how to improve her meatloaf, and Person has earned the same respect with his music. This guy is a treasure. Keep playing it, brother; keep playing it.

Blues Everywhere; All Too Soon; I Wished On The Moon; Kiss And Run; So Nice; I've Grown Accustomed To Her Face; Close To You; Star Eyes; Minor Inconvenience; Easy Living; Everything I Love; Stephen Sondheim Medley.