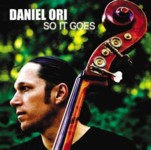 Fate deals its own cards. The first instrument of choice for bassist Daniel Ori was the piano which he began playing at his grandmother's house. When he was 14, Ori noticed his brother's electric bass and picked it up. From then on he began his musical journey getting involved with jazz which he began studying in Israel. He later continued his studies at the Berklee College of Music.

Ori recorded his first album, Money (Fourward Quartet, 2005), in Israel with the Fourword Quartet. His second—and first as a leader—So It Goes, is quite an ambitious project in that he penned all the tunes and absorbed elements of world music throughout.

"On a Tin Floor" starts off as an invitation to dance, before it goes on to cut a deeper swath. The Jewish influenced melody is given its soul by Uri Gurvich, who plays with deep sensitivity before Gabriel Guerrero takes it out of the cocoon and improvises on the theme. The moves are complementary but they also serve as the counterpoint, both working in tandem to sinew the tune. The muscularity is made firmer by Gurvich on his return, the melody now underscored by the band as a whole.

Ori sets a modulated pulse for "Morning to Evening," with the melody floating in on the wings of the bass and piano. Guerrero stays in the organic atmosphere of progression even as he turns on the warmth with his deeply etched textures. The dreamy landscape is then colored by Ori, who intersperses warm splashes with gentle daubs and adds the final glow.

"Lean" is another contemplative tune. Guerrero once more sets the tone—this time his phrases are long and deep, yet fluid. The arrangement adds to the impact. Jeff Miles adds to the aesthetic with his modulated playing on the guitar that kisses the edge of bebop. His notes are round and gorgeous extending the spell cast by the alto saxophone's orbital trajectories.

Ori makes an auspicious debut at the helm. He writes with perspicacity, and in doing so gives his music not only immediacy but a telling impact as well.

On a Tin Floor; Susurrus; Usul; Manna Blues; Lean; So it Goes; Heal; Morning to Evening.