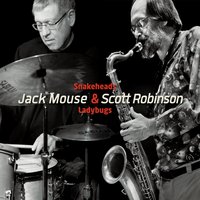 Jack Mouse plays drums; Scott Robinson plays almost everything else. So even though the word "duets" is (properly) used to describe their two-part collaboration on Snakeheads & Ladybugs, the album's concept and resolution go far beyond that. For example, there are no written compositions here, simply perceptive and spontaneous improvisation between two inordinately accomplished musicians. Free jazz? That label would not be misused. There are, on the other hand, prescribed conventions and boundaries to which both participants adhere. Even in their most outlandish moments, Mouse and Robinson profess an unswerving allegiance to melody, harmony and rhythm that prevents "freedom" from morphing into rampant chaos.

Even so, these off-the-cuff stratagems won't suit everyone's taste. And that may be an understatement, as it doesn't necessarily follow that appreciation for what Mouse and Robinson are doing will translate into fondness. What they are doing is feeding, in some way, off each other's moves, like dance partners swapping the lead or marathon runners maneuvering for position. Each number opens with either Mouse or Robinson setting the mood and tempo, after which the motif unfolds freely as they listen closely and respond to every nuance, no matter how singular or subtle it may be. The upshot could be as sinuous and enigmatic as "Orcan," strident as "Funk Infestation," "Scorch" (or almost any other item on the menu) or as relatively explicit as the foursquare "Two Minute March," a brief vignette whose name is aptly descriptive, or the canonical finale, "FreeBop."

Robinson, an acknowledged master of many instruments, limits himself to four—tenor and C-melody saxophone, cornet and e-flat clarinet. Mouse, meanwhile, makes good use of every component in his drum kit to shadow each of them. As noted, their intuitive interplay, resourceful as it may be, is by no means aimed toward an inclusive audience but is designed instead to please those to whom the term "free jazz" is admirable and substantive. If you count yourself among them, Snakeheads & Ladybugs should prove altogether agreeable.