Steps/Mike Mainieri: Smokin' in the Pit/An American Diary: The Dreamings

By David Adler
February 1, 2000
Sign in to view read count 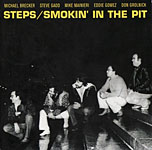 These two NYC Records releases document the musical evolution of label founder and vibraphonist Mike Mainieri. Smokin’ in the Pit, a reissue of a hard-to-find double live album by Mainieri’s jazz supergroup Steps, is stuck in its late 70s moment. It feels like cheap thrills compared to Mainieri’s most recent solo record, An American Diary: The Dreamings, which possesses a timeless quality and manages, despite its wild eclecticism, to tell a coherent and deeply personal story. This album, the second in a series, confirms Mainieri’s status as one of our most imaginative artists.

The playing on Smokin’ in the Pit is impressive, but some of the material is marred by a lack of subtlety and dynamics. Eddie Gomez’s bass is way too high in the mix and Steve Gadd’s drumming is rather stiff, especially on the swing tempos. Joe Henderson’s "Recordame," which was unavailable on LP, is given a weird, disco-like treatment. But newly added alternate takes of the two roof-raising sambas, "Fawlty Tenors" and "Not Ethiopia," showcase some fine playing all around. And fans of the late, great Don Grolnick will want this reissue if only for two previously unreleased Grolnick compositions, "Uncle Bob" and "Momento," the latter an unaccompanied piano solo. These are indeed worth the price of admission, as are Mainieri’s three delightful ballad features, "Lover Man," "Song to Seth," and "Soul Eyes."

The Dreamings is the work of a more refined Mike Mainieri. His principal players are saxophonist George Garzone, bassist Marc Johnson, and supple and swinging drummer Peter Erskine, who took over from Steve Gadd back when Steps became Steps Ahead. These four are joined by a circulating cast of guest musicians. Each track is a wholly new experience, distinguished by unexpected timbres and colors. Especially noteworthy are George Garzone’s clarinet on "One Night In Paradise," Erik Friedlander’s cello on "Planting Rice Is Never Fun," Simon Seven’s didjeradu on "The Dreamings," and Arto Tuncboyan’s sazabo on "Dear, My Friend (The Gift)."

Mainieri’s goal was to explore his musical upbringing in an American immigrant family, as well as his later experiences as a traveling musician. His first American Diary (NYC, 1995) included music by composers ranging from Aaron Copland to Frank Zappa. This diary entry crosses more exotic terrain: folk material from the Philippines and Yemen, as well as original pieces inspired by Australian aborigines, gypsies, and the Navajo and Apache tribes. Mainieri’s use of the term "American" is therefore expansive, and subtly provocative. But the session never comes across as stilted political correctness or aimless "world" music. It swings. And in so doing, it communicates with the listener in a way that is entirely genuine and unaffected.