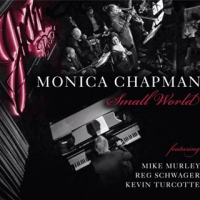 Romanian-born, Toronto-based vocalist Monica Chapman delivers Small World, her third album since 2013, in a concept recording of songs from some of her favorite movies such as Gypsy, Band Wagon, Goldfinger, and Sweet Charity just to name a few. A classically-trained singer who performed musical theatre, Chapman had always had a passion for movies but was encouraged late in life to apply her vocal talents in the jazz realm which she has since done remarkable well. Making the transition from classical to jazz can be fairly difficult "but it wasn't a problem for me," she states as this versatile singer loves to combine different musical styles.

Getting a little help from producer, agent and pianist Bill King, Chapman puts together an exciting group of Canadian artists to assist her in this endeavor. Among the standout and Juno-award winning musicians on this album are, alto saxophonist Mike Murley, drummer Mark Kelso, guitarist Reg Schwager and trumpeter Kevin Turcotte. Anyone who has seen the James Bond movie Goldfinger, cannot forget the title song voiced by Shirley Bassey which Chapman reprises here adding a little jazzy twist making the old classic a bit more interesting.

The singer is in excellent form voicing the 1962 standard "Piel Canela" (Cinnamon skin) in Spanish before going soft and mellow on the title track from the movie Gypsy featuring Rob Somerville on a delicate trombone solo as the singer voiced the lyrics with warmth. The Juan Tizol/ Duke Ellington standard "Caravan" takes on a whole new texture with a Latin jazz beginning as the leader turns on the charm while the band re-defines the song in dressing up the melody. One of the terrific tracks not to be missed is the lively "Baby It's Cold Outside" where the songstress performs a vocal duet with drummer Kelso before returning for a solo performance of "What Kind of Fool Am I," the time-honored classic from Anthony Newley.

Cole Porter's immortal "So in Love" gets a new perky arrangement featuring solo shots from trumpeter Turcotte and saxophonist Murley in support of the singers charm offensive on an excellent rendition of the old standard. Pianist King's haunting introduction to Billie Holiday's "Don't Explain," sets the mood for this down tempo burner as Chapman sings with graceful emotion on the last ballad of the album which, comes to a close on the George and Ira Gershwin's "A Foggy Day," a tune where Chapman reaches a bit as Schwager's guitar provides the supporting riffs in one of the finest versions of the tune around.

Containing an A-list of Canadian artists, a repertoire of fine movie tunes and more, Monica Chapman's Small World delivers an enchanting musical statement from one of the finest voices on the Canadian jazz scene today, well done!

A Shine on Your Shoes; Goldfinger; Piel Canela; Small World; Caravan; Baby It's Cold Outside; Big Spender; What Kind of Fool Am I; So In Love; Orange Colorado Sky; Don't Explain; A Foggy Day.