By BRUCE LINDSAY
August 6, 2009
Sign in to view read count 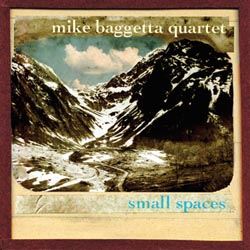 New York based guitarist Mike Baggetta has recorded as a band leader before, but Small Spaces is his first CD as the leader of a quartet. This beautifully recorded CD of seven Baggetta originals and one cover, produced by Baggetta himself, shows that his 2009 ASCAP Young Jazz Composer award was well-deserved.

Baggetta's guitar playing is characterized by a full, warm, tone whether he's vamping behind band members, soloing or duetting with Jason Rigby's tenor. Rigby's tenor style works beautifully in tandem with Baggetta's guitar: at no time do the instruments clash or work against each other, both musicians always displaying an understanding of what the other is doing.

The opening "The Heights" and closer "Trails" are the most open and free-form pieces on this album. "Trails" has a particularly laidback feel to it, with drummer R.J. Miller's brush work and Eivind Opsvik's bowed bass part forming a solid foundation for sparse and atmospheric playing from Baggetta and Rigby. It's the more melodic numbers that work best, however. "Olive Tree," by Taiwanese composer Lee Tai-hsiang, is a delicate ballad with a beautiful melody line, played sparingly and effectively by Rigby after a sympathetic guitar intro in which Baggetta makes good use of harmonics. On "Small Spaces" Miller's drum work moves the tune along with an almost funky beat as Rigby and then Baggetta take solos.

The first half of "Hospital Song" is particularly affecting. For the first three minutes Baggetta and Opsvik each play melodic patterns, underpinned by Miller's busy yet sympathetic drums, until Rigby enters and gradually takes over the lead role. Soon after, this the tune becomes less structured and also less effective, but the melodic approach of the tune's opening returns before the end. As a whole, Small Spaces is evidence of a maturing composer and a talented quartet of musicians who are willing to take the occasional risk while still not losing sight of melody and structure.