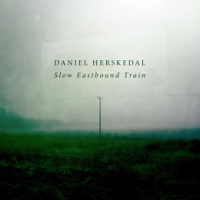 Sometimes, album titles tell all: sometimes they tell little or nothing. Slow Eastbound Train sits somewhere in between. Train? No obvious examples. Eastbound? Hmm. Slow? That pretty much describes the pace of much of the music on this album, by Norwegian musician and composer Daniel Herskedal. But none of these three words come close to describing the grace, inventiveness and beauty of this lovely recording.

Herskedal plays tuba and bass trumpet, both with a fluidity and melodic strength that are not always associated with these relatively unusual instruments. His tone on tuba especially is warm and soft, which lends a comforting friendliness to his every appearance on the instrument. He's been recording since the early '00s but really came to the attention of the jazz world with Neck Of The Woods (Edition Records, 2012), which paired him with saxophonist Marius Neset. On Slow Eastbound Train he's joined by pianist Eyolf Dale, percussionist Helge Andreas Norbakken and the Trondheim Soloists, a string chamber orchestra.

Herskedal's compositions are strongly atmospheric, readily creating musical imagery that for the most part fits well with the title of each piece. A quick glance at the track listing makes it clear that weather and climate are key influences—the stately "Slow Eastbound Boat" and "Slow Eastbound Train" being exceptions. "The Mistral Noir" is an exceptional scene-setter, Heskedal's playing taking center stage on a tune that evokes a sense of warmth and calmness, in contrast to the Mistral wind of the title. On Mussorgsky's "Bydlo"—the one non-original track—Herskedal's tense, upper-register, playing is counterbalanced by the stately Trondheim Strings.

Pianist Dale sets the tone on the skittering, anxious, "Monsoon Coming" before Herskedal and the Trondheim Soloists enter and the anxiety gradually dissolves. "Daniel's Dust Devil" acts as a coda to "The Solar Winds' Effects On Earth" and the introduction to "Slow Eastbound Boat": a solo tuba performance with its emphasis on rhythm, Herskdal plays with a rasping, fruity, tone that gives the tune a touch of light-heartedness. "Snowfall" is a joyful celebration, the strings and piano playing swooping, darting rhythms like children chasing snowflakes.