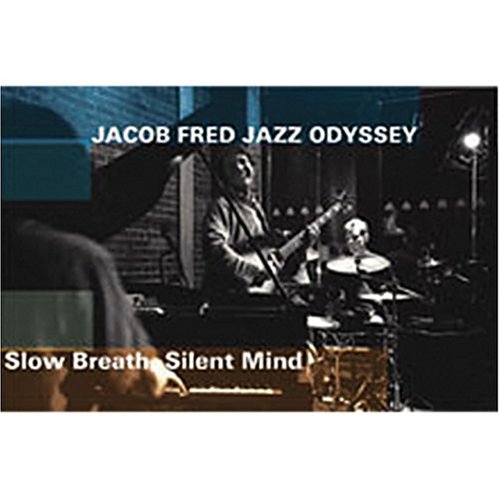 Jacob Fred Jazz Odyssey tiptoes along the fine lines separating rock and jazz and all the various sub- and sub-sub- genres of the two. There’s a salient jam band ethos in their music, right next to the influences of classic and psychedelic rock, hard bop and experimental/avant jazz. This broad source of inspiration has won them a following from the university party scene to somewhat fussier critical circles.

Culled from recorded performances during a two-month U.S. tour in autumn 2003, Slow Breath, Silent Mind sees JFJO—bassist Reed Mathis, drummer Jason Smart, pianist Brian Haas—taking up more standards and covers than their audience might have expected. Seven of these eleven tracks are by composers who have, in one way or another, shaped JFJO’s sound: Broadway lyricist Howard Deitz, Freddie Hubbard, Wayne Shorter, Duke, Trane and Monk. The only songwriters missing from this list are Trey Anastasio, Dave Matthews and Jerry Garcia.

The good news is that the non-original charts on Slow Breath, Silent Mind are on the whole well executed, confirming JFJO’s apparent assertion that they’re able to give a tuneful, intelligent treatment to the songs of others. The bad news is that the standards and covers make the original tracks sound terribly bland in comparison. Place a song like the opener—a bluesy rendition of Duke Ellington’s “In a Sentimental Mood,” full of the growls and shrieks of Mathis’ octave-induced acoustic bass—next to Haas’ repetitious, Phish-like “Nibbles,” and the contrast in quality immediately becomes apparent. The five-and-a-half ethereally New Age minutes of the trio’s “Improvisation for STS9” (Sound Tribe Sector 9 is a kindred band) are just plain irritating. The title track, written by Smart, is a bit meatier, but still sounds as generic as a score for an unwritten film.

Like so much of Béla Fleck’s output, Slow Breath, Silent Mind has an indisputable crossover appeal. Festival-hoppers will probably adore it. Unlike Fleck, the gents in JFJO don’t seem to be doing anything new here compositionally or sonically—unless you count Mathis’ attempts to make his acoustic bass sound like an electric guitar as a breakthrough of some sort. The covers of Hubbard’s “Up Jumped Spring” (spry, cleverly tongue-in-cheek) and Trane’s “Central Park West” (sombre, reverential, aching) are worth hearing, but there are still many, many discs more worthy of your ear.