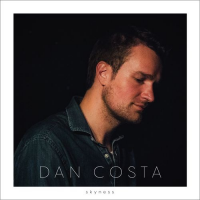 The gentle piano "Prologue" instantly telegraphs that something rare and luxurious is on its way. These are the opening chords of Skyness, the gifted pianist/composer Dan Costa's 2018 follow-up to his auspicious 2016 debut, Suite Três Rios (also self-produced), which peaked at number one on the iTunes jazz chart and was named one of the year's best albums by Downbeat. Born in London to Portuguese and Italian parents, Costa has studied and lived in Brazil, France, Portugal, and Sweden, and salutes the special light of an idyllic Greek island with his song "Iremia," which means "peacefulness" in that ancient language.

In his brief liner poem about the meaning of Skyness, Costa conjures "the open-minded stillness" of that expanse, which offers "an invitation to outer harmony and inner peace." And the music here really brings that invitation home.

The delicious "Tempos Sentidos" (roughly, "sense of time") opens with a strong melodic wake-up call, then slides into its languorous melody as if it were a fragrant bath. Costa's unfussy piano and Jorge Helder's elegant bass are enhanced by the exquisite commentary of guitar master Roberto Menescal. "Compelling" is more oblique and free, adding the warm, rounded tone of flutist Teco Cardoso, while the misterioso "Lisbon Skyline" features the twelve steel strings of Custodio Castelo's Portuguese guitar, evoking the bluesy fado tradition associated with this instrument.

Other guest luminaries include guitarists Romero Lubambo and Nelson Faria and Seamus Blake on tenor saxophone. This would be impressive company in any case, but it's especially so considering that Skyness is only Costa's second album, made when he was not yet 30. The three solo pieces highlight his eloquent technique and introduce classy originals that sound like nothing else.

Although it is tempting to map the delight found in each of these nine tracks, it's arguably more enjoyable for listeners to make those discoveries for themselves. But here's a helpful summary: while Skyness has a relaxing effect, this is not bland wallpaper for the ears—not with such lovely melodies, sophisticated harmonies, and soulful contributions of seven world-class artists. The only quibble is that, at 40 minutes, the CD is a bit too short; but if the only problem is that there's not enough music, it's a great one to have.