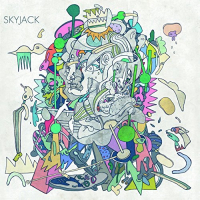 Don't let the name fool you here. There's no hostile takeover at twenty-thousand feet, no violent occupation of a specific vehicle, and no saboteur to wreak havoc on this voyage. Skyjack is a cooperative venture that's about the art of creation and community, not the co-opting of a certain airspace or the pursuit of pure destruction. It's essentially an international musical summit that connects some of South Africa's finest young jazz greats with some strong-minded Swiss talent.

The seeds for this band's debut album, recorded in Switzerland in 2015, were sowed on South African soil two years prior. That's when and where pianist Kyle Shepherd, bassist Shane Cooper, and drummer Kesivan Naidoo—a trio of celebrated Cape Town-connected contemporaries who've each taken home the Standard Bank Young Artist Award in recent years—first teamed up to perform with tenor saxophonist Marc Stucki and trombonist Andreas Tschopp. Subsequent tours in Switzerland followed, along with some awards and acclaim, and the studio finally beckoned. Now the recordings have arrived, presenting the flavorful musical fruits of this collaborative quintet's labors.

Skyjack delivers nine original works—one from Naidoo, two apiece from each of the other band members. Taken together, they don't rest in or point toward any specific zone. You can certainly tag all of this as post-modern jazz, but that's an umbrella that covers far too many things to function successfully as a descriptor for any. Instead, it's better to simply view the album as a team-based work of architecture and see each piece as a reflection of a specific composer's mindset and communicative spirit at a given moment in time.

Cooper first captures attention and capitalizes on the imagination as the album gets underway. His "Tafattala" takes the ear along on a desert caravan that finds Tschopp sighing, moaning, braying, and praying through his trombone. He's not the only one to draw attention, but his voice proves to be the most magnetic. Balladic sentiments follow with Tschopp's own "En Passant." It's a piece that benefits from a soft sell approach, both in the way it grows and in the way the musicians voice their ideas. Naidoo, for example, delivers expressive brush breaks on snare that are more painterly and poetic than potent and percussive in nature.

With each successive performance, the band's gaze widens while rapport deepens. Cooper and Tschopp sync up to set Shepherd's "Anonymous In New York" in motion, ushering in a number that focuses on togetherness while ceding space to Tschopp's horn; South African spirit seasons Stucki's "Grandemere Dansant," a winning waltz that touches on glee-filled Goema among other topics; and Naidoo's "Freedom Dance" juxtaposes unrestricted thought against a fixed grooving riff, interspersing excerpts of Nelson Mandela's famed "I Am Prepared To Die" speech before and between sections of music that find everybody taking liberties and detours in a rhythmically charged environment.

This music is pure independent thought and unity, held together through powerful and beautiful bonds. It would seem that not even the sky is the limit for Skyjack.