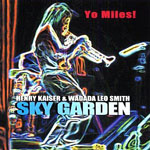 With Miles Davis' electric period finally gaining the credit it deserves, the number of groups recording everything from "music-informed-by" to flat-out tributes is almost too large to count. Everyone from Dave Douglas to George Schuller has, in some shape or form, created works influenced by Miles' electric excursions. But when guitarist Henry Kaiser and trumpeter Wadada Leo Smith released Yo Miles! back in '98, it was clear that the bar had been raised. Without losing site of their own distinctive voices, they managed to create a tribute that completely captured the spirit of that controversial period, demonstrating how it has so strongly influenced what was to come. Now Kaiser and Smith have reconvened to release the next set in the series; Sky Garden is at once a continuation of the concept and an evolution.

Other than bassist Michael Manring, guitarist Chris Muir and the ROVA Saxophone Quartet, who appear on "Sivad," it's an entirely new cast of characters, including drummer Steve Smith, keyboardist Tom Coster, saxophonists John Tchicai and Greg Osby, and guitarist Mike Keneally. The emphasis, this time around, seems more on interpretations of space. There is a richer ambience that is more textural, less intense. Pieces like the thirty-minute "Great Expectations" extrapolate on the open-ended terms of the original, but take it further with captivating duets between guest percussionist Zakir Hussain and Smith, Tchicai and Osby.

Sky Garden is also less dense. The first album was guitar-heavy, with Kaiser, Muir, Nels Cline, Freddie Roulette and Elliott Sharp creating a virtual wall of sound. There were also two percussionists and two keyboard players to replicate Miles' thick jungle vibe. This time around, with fewer players, the music breathes more. The emphasis seems more on exploring the ambient side of Miles' electric work that set precedence for much of the trance music heard today.

There is also a greater emphasis on original material; Smith contributes four extended pieces that are so right as to be virtually indistinguishable from their source. The final track, "Cozy Pete," is a group improvisation that is reverential yet completely modern.

Special mention needs to be made about Manring, who manages to bridge the gap between the hypnotic, almost naive simplicity of Miles' bassist of the time, Michael Henderson, and his more prodigious technique that never overshadows the essential groove of the material.

Sky Garden has been released as a dual-layer SACD hybrid, which means that those fortunate enough to have an SACD player can hear the album's ultra-warm DSD recording. But to these ears, even the standard CD layer is remarkably rich and full. The most notable difference between Miles' recordings and Sky Garden is the more pleasing sonic clarity and more spacious aural landscape. But recording quality aside, Kaiser and Smith have, once again, demonstrated that Miles' electric explorations were truly ahead of their time; they sound contemporary in ways that few other, if any, fusion recordings of the time do.