By John Kelman
September 2, 2009
Sign in to view read count 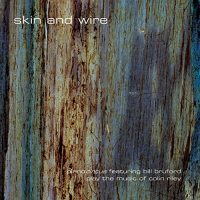 For his final release of "new" music, percussionist Bill Bruford collaborates with Pianocircus—an all-keyboard ensemble best-known for its unique coverage of largely contemporary classical music, fitting somewhere between Steve Reich and Phillip Glass' systems music and the avante leanings of Estonian Erkki-Sven Tüür and David Lang. With four of Pianocircus' six members alongside Bruford and bass guitarist Julian Crampton, Skin and Wire features music by Colin Riley, who occupies similar territory, but adds elements of electronics and ambient music to the mix. With plenty to appeal to fans of Swiss pianist Nik Bartsch and albums like Stoa (ECM, 2006), there's also much to differentiate Riley's writing.

Riley's music is about more than a hypnotic pulse, complex polyrhythms and the mathematical interlocking of multiple musical parts. "Kit and Caboodle," the only collaborative composition—with Bruford, not surprisingly, given its visceral pulse—possesses clear great forward motion. Still, it's an episodic piece with a hint of Norwegian keyboardist/composer Jon Balke's idiosyncrasies, a gentle interlude of electric keyboards approaching the trance-inducing stasis of Brian Eno's Music for Airports (Virgin/Astralwerks, 1978), and tempo shifts that lend it its own distinct complexion.

"Pale Corridor" is softer but no less hypnotic, as otherworldly electronics combine with reverb-drenched piano and a shifting pulse from Bruford that juxtaposes soft textures and a subdued backbeat, even as the dynamics gradually intensify to a climax that then dissolves into sparer, ethereal atmospherics.

Bruford—spending the latter part of his career in jazz, but earlier years with King Crimson giving him plenty of opportunity to hone his skills as a colorist—is the ideal choice for Riley. Defined, in his earliest days with Yes and Crimson, by his mathematical precision, Bruford's later jazz proclivities result in a looser feel that's equally vital to Riley's imaginative, stylistically unfettered writing. On the darker, "The Still Small Voice," oddly constructed rhythms hide in the weeds, emerging only occasionally, while Bruford's expanded, percussion-heavy kit provides expansive color to Riley's hauntingly beautiful score for keyboards and piano—a combination of queued themes and quirky sonics.

Keyboardists David Appleton, Adam Caird, Kate Halsall and Semra Krutac possess a wide range of experience, transcending the contemporary classical realm in which they largely live. Hints of Gamelan introduce the album closer, "Ebb Cast"; electric keyboards create a soft landscape over which occasionally sharp bursts of piano punctuate with minimalist patterns that ebb, flow and ultimately disappear. Much of Skin and Wire possesses hooks on which a hat can be hung; still, for the most part, this is music to be felt and experienced as much as it is to be heard.

Progressive, but in a completely different sense than the groups with whom Bruford cut his teeth, Skin and Wire is a sadly final demonstration of the recently retired drummer's intrepid interest in all things musical. Still, with Skin and Wire's unequivocal beauty and genre-busting writing, here's hoping he can be coerced back into the studio on occasion for more creative projects like Skin and Wire.