By John Kelman
October 6, 2008
Sign in to view read count 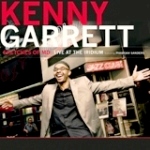 Kenny Garrett continues his relationship with tenor legend Pharoah Sanders from Beyond the Wall (Nonesuch, 2006), but ditches some of the gravitas for Sketches of MD: Live at the Iridium. An album of unabashed blowing and multiplicity of stylistic references, it's the closest Garrett has come to his seminal Standard of Language (Warner Bros., 2003). Were it not for one misstep, it would be the closest thing to perfect that Garrett has released.

"The Ring" kicks the album off in fine modal form, pianist Benito Gonzalez combining McCoy Tyner's block chords with a lighter touch, as first Garrett and then Sanders take solos that build inexorably to screeching fever pitch. Few saxophonists alive know how to milk a single note the way Garrett does, and here he uses that skill to create a tension so great that when it finally releases, it's almost possible to feel the audience sink back into its seats. It wouldn't work, of course, were it not for Benitez, bassist Nat Reeves and Jamire Williams keeping the groove and filling the spaces in all the right places to help both saxophonists ratchet the heat beyond boiling.

Like "The Ring," the more bluesy "Intro to Africa" invokes the spirit of John Coltrane, who Garrett paid tribute to so beautifully on Pursuance (Warner Bros., 1996). This time, however, it's his own writing, as a six-chord pattern cycles for nearly ten minutes, providing a different vibe but similar spiritual tone to Coltrane's classic A Love Supreme (Impulse!, 1964). Things become more electric on the title track, as Garrett begins to use a variety of effects on his horn, evoking his old boss Miles Davis' electric period yet avoiding direct imitation. Gonzalez begins to blend in some electric keyboards as Williams turns to a second line groove on a tune that's as much about texture as it is melody; a ten-minute vamp that shifts to freer, more spacious territory as Garrett takes an opportunity to introduce the band.

"Wayne's Thang," from Triology (Warner Bros., 1995), gets a sonic update with Benitez's Fender Rhodes and Garrett's effected alto. It's a continuation of the album's move towards the funky, culminating in Garrett's signature set-closer, the buoyant title track to Happy People (Warner Bros., 2002) and Sketches of MD's one flaw. Not that there's anything wrong with this bright, ebullient "audience participation" tune. Its core is both catchy and substantial, but when Garrett hangs onto its chorus for nearly eight minutes with three false endings, it loses its excitement and turns tedious.