Herb Robertson and the Space Cadets: Sketches from the Other Side, For A.I. 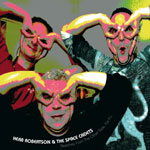 Despite his identifiable, idiosyncratic sound and highly creative output, trumpeter Herb Robertson is often overlooked. Perhaps this is a consequence of the seeming paucity of leader releases since his days on JMT. But this may change, as he forays into the realm of artist-run labels with Sketches from the Other Side, For A.I., the inaugural release by his Ruby Flower imprint.

It's an ambitious premier, pairing his trumpet and cornet with Frank Gratkowski's clarinets and alto sax and Julien Petit's tenor and baritone saxophones for two extended suites. Without a rhythm section, the horns are responsible for keeping time and shaping the music. Even more, the session was recorded in a single continuous take without pauses or edits.

The six-part namesake composition unfolds contemplatively, the members of the trio extemporaneously orbiting each other as they wade toward the thematic material. "A.I.'s Theme features a lolling unison, punctuated by Robertson's blasts as Gratkowski anchors the suite on bass clarinet. The composition, and the improvisation that emerges, is generally subdued and patient. But there are frenzied moments and dynamic group interplay. On "Geometric Entities the melodic line jumps between the players, each extrapolating before passing it along, while the long-held notes of the minimal "Spectrum of Petals set up a spare whispered solo by Robertson.

The "Etiology Suite is more immediate and shorter, with only four parts clocking in at about twelve minutes. Petit takes the bottom line on baritone sax, unleashing Gratkowski's incendiary alto. Extended techniques dominate "Coming to Terms, which segues into the strained, almost dissonant "Closing In. An infectious baritone groove emerges from the chaos for the final two movements—setting up Robertson's humorous psychedelic vocals, a Gratkowski torrent and another spry trumpet flight.

Sketches illustrates Robertson's prowess as a performer, from soft lyricism and tight ensemble playing to boisterous free improvisation—and it makes a vivid opening salvo for his new label.

Visit Herb Robertson on the web.

Title: Sketches from the Other Side, For A.I. | Year Released: 2006 | Record Label: Ruby Flower Records