The Harry Allen-Joe Cohn Quartet: Hey, Look Me Over 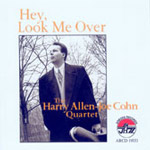 As written in the liner notes, Harry Allen and Joe Cohn "fit together like pieces of a jigsaw puzzle. Joined by Joel Forbes (bass) and Chuck Riggs (drums), Allen's tenor sax and Cohn's guitar play their way through several originals and a collection of standards that have not been overexposed.

Both Allen and Cohn have been influenced by some of the major musicians on their respective instruments while developing their own styles. They also share a similar sense of humor. A "working band," the four players operate as a single organism.

The opening "With The Wind And The Rain In Your Hair, one of the not-overdone standards favored by Allen, functions as a salute to Stan Getz (who recorded it in the early '50s). Three of the originals ("Take Four, "Travisimo and "Danielle ) were written by Cohn's father, tenor man Al Cohn. The first two are up-tempo, Cohn playing contrapuntally against Allen's solo, while the last is a lovely ballad done as a bossa. Forbes gets a chance to shine on "Pick Yourself Up and Riggs shows off his tasty drumming on "It's Been A Long, Long Time and "Seven Come Eleven. One of the high spots is Allen's perceptive reading of "I'll Only Miss Her When I Think of Her.

With the Wind and the Rain in Your Hair; Take Four; It's Been A Long, Long Time; Hey, Look Me Over; Seven Come Eleven; I'll Only Miss Her When I Think of Her; Travisimo; Get Out; Pick Yourself Up; Danielle.