By JOHN KELMAN
September 27, 2008
Sign in to view read count 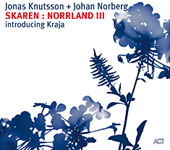 Integrating traditional music from countries beyond the borders of the United States into jazz may sometimes seem a stretch. Sometimes it simply doesn't fit even the broadest definition of the music, but ultimately it matters not. Jonas Knutsson—familiar to ECM fans for his collaboration with vocalist Lena Willemark and multi-instrumentalist Ale Moller on the folkloric Nordan (1994) and Agram (1996)—has become Sweden's premier saxophonist in the folk/world sphere. The delicate beauty and joyous optimism of his Norrland series, teamed with the superb Johan Norberg—a guitarist with no small jazz cred via work with trumpeter Tim Hagans and trombonist Nils Landgren—is an ongoing musical love letter to Sweden's northernmost region.

Skaren: Norrland III moves the series in a new direction with the addition of bassist Eva Kruse—heard on the dark-hued and more jazz-centric [em]3 (ACT, 2008)—and, most significantly, Northern Sweden's female vocal quartet, Kraja. ACT label head Siggi Loch's serendipitous discovery of these four singers—Lisa and Eva Lestander, Frida Johansson and Linnea Nilsson—parallels the artistic suggestions made by ECM's Manfred Eicher, taking the Knuttson/Norberg duo to an entirely new level.

Combining traditional tunes, arranged by various members of the septet, and original material by Knutsson, Norberg and Kruse (individually and collectively), it's often difficult to differentiate between the two, so deeply ingrained is the cultural ethos in the players. Norberg's use of the dulcimer-like kantele on the gently rhythmic "Resan," ethereal "Guoika" and haunting closer, "Vaggsang," draw a clear line between the Scandinavian tradition and the folk music of Ireland and Scotland. On guitar, Norberg's use of altered tunings links him to traditional players including Martin Simpson and Martin Carthy.

Knutsson's ability to soar over Norberg and Kruse's foundation on the buoyant Bavarian "Schwarzer Bua" and Norberg's bright title track, recalls Paul McCandless' more lyrical work with Oregon, although the harmonic world of Skaren is far more direct. Still, Knutsson and Norberg are skilled players who subtly stretch the boundaries of their tradition.

Kraja adds depth and a timeless quality that, at times, is reminiscent of Jan Garbarek's work with the Hilliard Ensemble on Officium (ECM, 1994); but with musical references from a folk rather than classical tradition, there's a levity that contrasts strongly with Officium's more profound gravitas. When Kraja sings a capella, as on the slightly melancholy "Majas Polska," the tranquil yet majestic "Nar jag om morgonen uppstar" and uplifting "Den signade dag," it brings a soft beauty to Skaren, where the four voices' lush warmth augments and juxtaposes with Knutsson's slightly tart tone.

The folkloric Skaren: Norrland III, with its sincere pursuit of the emotional resonance of the simplest melody and an ability to shed light on occasional darkness, may seem an oddity in the ACT catalog. Ultimately, however, it lends the label a limitless stylistic reach that transcends categories to simply find music that touches the head and heart, the body and spirit.