Nate Wooley Sextet: (Sit In) The Throne of Friendship

By Troy Collins
September 3, 2013
Sign in to view read count 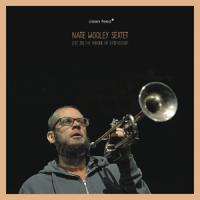 Since arriving in New York City in 2001, Nate Wooley has established himself as one of the most inventive trumpet players of his generation. In addition to the admiration of his peers, including fellow trumpeters like Taylor Ho Bynum, Peter Evans and Kirk Knuffke, Wooley has earned the respect of esteemed scene veterans, such as Dave Douglas, who said "Nate Wooley is one of the most interesting and unusual trumpet players living today, and that is without hyperbole."

(Put Your) Hands Together (Clean Feed, 2011), the debut of Wooley's Quintet, offered a notable demonstration of his leadership skills. (Sit In) The Throne of Friendship is the premier of his Sextet, an augmented version of the abovementioned Quintet, which features both Opsvik and Peck performing in tandem. Expanding upon the territory explored on the previous release, Wooley and company imbue beguiling melodies and captivating rhythms with freewheeling episodes of bold invention, interweaving appealing themes with acerbic textures.

(Sit In) The Throne of Friendship is a salient example of Wooley's diversified talents as a soloist, writer and bandleader. Reinforcing the album's titular theme is the affable rapport of Wooley's empathetic sidemen, whose conversational interplay brings his engagingly adventurous tunes to life.