Martin Bisi: Sirens Of The Apocalypse

By John Dworkin
February 26, 2009
Sign in to view read count 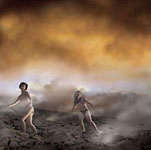 Experimental indie artist Martin Bisi's Sirens Of The Apocalypse, including extensive artwork and an embedded video, is akin to a pop/punk reflection of Baz Luhrmann's 2001 film, Moulin Rouge. It's kitschy, self-serious, goofy, theatrically carnivalesque, and generally in-your-face. And like Luhrmann's film, it will likely elicit polarized opinions. Some will be so wildly annoyed they'll stop listening halfway through, while others will exclaim "brilliant!"

While Sirens is Bisi's sixth effort as a solo artist, his main gig is as a record producer. As a producer he's made nearly one hundred records since the early '80s. The list of artists he's produced reads like a mini "who's who" in the fringe pop, underground, and avant-garde: John Zorn, Brian Eno, Sonic Youth, Fred Frith, Elliot Sharp, Lydia Lunch, Bill Laswell, Peter Brotzmann, and The Dresden Dolls for starters. With band names like Lubricated Goat and record titles such as Dry Humping The Cash Cow (1994) and God Is God, Puke Is Puke (1995)—both on the Alternative Tentacles label—on Bisi's resume, his aesthetic begins to become clear.

But Sirens is not as hardcore as most of what he's produced. It often plays like a punk Rufus Wainwright in that Bisi's songs come off as mini operettas. Or ambitious, disjointed musical theater by Kurt Weill if he was an A.D.D., lower East Side punk from the '70s.

Instrumentally it's more '70s/'80s classic rock than punk. But it's Bisi's attitude, lyrics, and vocals that give it its edge. He's not really a singer in any traditional sense. In sync with his theatrical side, he tends to speak—or more accurately recite—his lyrics. And he's regularly over the top in his affect. Imagine an emotional Lou Reed or perhaps Bill Murray's smirking and sarcastically overblown (yet oddly lovable) lounge singer from Saturday Night Live as a punk rocker.

In fact, the tunes becomes more successful the closer Bisi moves toward actually speaking. The opening lines to "Nadine"—"I love your mind/as it drifts in the morning/I think you're my little pie,"—set up one of many ironies as the song goes on to tell of Nadine's work as a prostitute. But the lyrics become frustratingly harder to decipher; like watching a play with actors who don't enunciate clearly. The lyrics are not made much clearer in the liner notes where they are cryptically, and incompletely, placed among saturated colors and artwork.

The best track is the straight, unaccompanied monologue "A Story (True) In Brooklyn." Bisi recounts his chance meeting in a bar with a self-described "clairvoyant" girl. His caustic and satirical observations of these characters have more in common with New York City playwright Eric Bogosian's material than any rock and roll band. It's straight theater. It conjures images, it's funny, and it's where Bisi shines.