BY MARTIN GLADU
November 2, 2008
Sign in to view read count 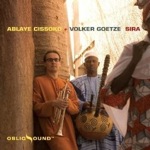 It is often said an image is worth a thousand words. Well, now that the concept of the album cover has been relegated to mere packets of metadata—at best experienced via the tiniest screen-mounted, portable music devices—it appears rather sad that fans will likely miss out on Ablaye Cissoko and Volker Goetze's cover of Sira. Somewhat banal in its aesthetic, it does however cleverly encapsulate the record's adventurous proposition: two musicians of clearly different backgrounds standing shoulder to shoulder in a dry, Senegalese alley. In the foreground, a slim woman with a pure-white shawl that rests on her frail shoulders; only half her face and body is visible. Insignificant detail you might think. Au contraire! As master painter Lovis Corinth professed, "The truth is in the details, not the broad sweeps."

In Senegal, one of the twenty poorest countries in the world, half the population lives below the poverty line. Decolonization, and its ensuing disavowal/detachment from the daily tragedies still plaguing countless faceless natives, has left deep, scathing scars that the intellectual press has only recently begun addressing. In such circumstances, traditions become proudly guarded jewels passed between generations inside families, tribes and communities. The lot thus imposed on women, especially mothers, becomes inevitably, and excessively, strenuous.

A son of griot, singer and kora player Ablaye Cissoko rises above the hardships of his own to sing songs of hope and peace. In that typical softness, generosity and warmth that characterizes the African people, he appears indeed like a white dove amid an arid, desolate landscape. As such, portions of the proceeds generated by the sales of the recording go to TOSTAN, a community-led organization benefiting women's health and human rights.

A symbolic meeting of the North and the South, or of Muslim and Christian ordinances? A post- Apartheid effort of reconciliation? Listening to Sira, it is certainly tempting, not to mention still apropos, to revive such metaphors. As is the constant necessity to recall the unfortunate sufferings endured by those born without wings. For the time being, solace is to be found in the music.

In "Domain Domain" for example, the dancing rhythm and ornate melody renders well the above- mentioned, jovial spirit of the Mandingoes. As does "Gorgorlou," a traditional chant tantamount to Cissosko's mosaics of trills. Gliding in and out of the griot's plucked glints and plaintive declamations, Goetze's flugelhorn-sounding interfacing on the lulling vamp from "Manssani Cisse" closes the disc, leaving a state of tranquil serenity behind, even long after it stops spinning.

A breath of fresh air, Ablaye Cissoko and Volker Goetze's Sira provides an oasis of calm in which to pause and rest, to reflect and be moved...to tears.