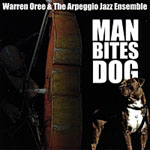 This lively, creative collection of originals by Philadelphia bassist Warren Oree and his Arpeggio Jazz Ensemble swings in a straight-ahead yet sometimes provocative way. There is a suggestion of jazz as social commentary, a theme set by another bassist, the late Charles Mingus. The cover art portrays the group as individualistic rebels, and their playing is dead earnest. They want you to know that "they mean you," to paraphrase the title of Thelonious Monk's tune, although it isn't always clear just what they do mean.

This album is paradigmatic of a genre that could be called "Philly existential jazz." My first glimpse of this style occurred when I heard the phenomenal guitarist Monette Sudler at a dive in West Philadelphia in the early 1980's. She played up a storm in an urban ghetto. It was the storm of the bombs the cops dropped on the Move headquarters. It had the dark feel one gets when roaming around a housing project or a back street in Philly. This very intense kind of music reminds us that much of the music comes from the godforsaken true heartland of America—the places where people sing the blues on a daily basis—the places that resemble war torn countries. Oree has said that the CD bears some symbolic reference to his Vietnam War experiences, but the traumatic memories of the War in 'Nam and the Philadelphia ghettos have commonalities like gunshots, snipers, and dying souls.

The tunes convey a wide range of emotions. The set begins with the energetic "Hot Chocolate," featuring Montgomery-style guitar work by Frank Butrey and Trane-like, sheets of sound sax soloing by Umar Raheem. "Rhumba's Light" provides what the name implies, then, "Better Than B-4" offers a mid-Eastern melody with a rock Latin beat and funky guitar and percussion sounds, ending with a brief vocal chant by Oree. "He Stayed and Played" segues through changes in rhythm throughout, with nice Pat Martino style guitar work by Butrey. Vocalist Nina Fletcher comes on with "Standing Under Happiness," offering intense Latin rock with a philosophical spin ("happiness is hard to understand") and subtle percussion work by Doug "Pablo" Edwards.

"The Messenger" provides upbeat swing with the melody doubled on guitar and tenor sax. Fletcher then offers "Looking and Seeing," her interpretation of a troubled, crazy woman, her stride captured by Oree's walking bass line. In "Black Cherry," Oree enacts the blatant seduction of a woman, with the obvious connotation the nickname implies. In a sharp and brief contrast, Graziella DiNuzzo Damelio speaks the poem "Figghi Beddi" (poet unknown). A bit out of context, the beautiful Italianate voice of Damelio speaks love, with an edge of tension in Oree's bass accompaniment. "Spotted Bushes" comes on with its jungle music: "Spotted bushes, spotted trees, the leopard is watching; ... he's prowling... he's hungry..." In this childlike yet serious evocation, the environment takes on the nature of the voyeur, the predator.

Finally, as if to state the ultimate meaning of the music, the CD concludes with the haunting midnight existential sounds of "Man Bites Dog 173/875." The significance of the numbers remains a mystery.